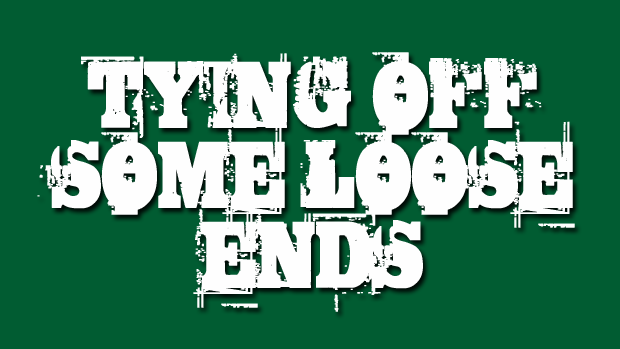 In this final installment of the series, I try to touch on some issues that have been brought to my attention during the process of writing these articles. Rather than try to rewrite this information into the original articles, I've included it in a "loose ends" kind of article here at the end.

About midway through the series, it was brought to my attention that I need to consider junior colleges as well. College-bound student-athletes typically end up in the NAIA or one of the three NCAA divisions, but they might also end up going to junior college route as well. My home state of Colorado has no JC track and field programs, but other parts of the country are positively thick with JC programs.

And, junior colleges run the entire gamut, from technical schools, to preparatory schools for exclusive four-year schools, to an academic option for those coming out of high school with a bundle of make-up work to do. There's a wide group of people who, for one reason or another, might end up considering a year or two in the junior college ranks.

Much like the NCAA and NAIA, the NJCAA has its own web site, its own set of eligibility standards, and--like the NCAA--its own letter of intent process.

The eligibility rules for the NJCAA are summarized in the downloadable NJCAA Eligibility Rules Document. The rules governing the NJCAA Letter of Intent are also contained in this document, starting on page 23. The NJCAA has rules governing visits by prospective student-athletes that are similar to the NCAA rules. These rules are also contained in the eligibility rules document, located on page 22.

Unlike both the NCAA and NAIA, the NJCAA treats cross country (including half-marathon) and track and field as separate sports. NJCAA schools are allowed up to ten scholarships per institution for cross country/half-marathon. They are allowed up to 20 scholarships for track and field. For this school year, December 1, 2012, was the first allowable date for a high school athlete to sign an NJCAA Letter of Intent. Generally speaking, initial eligibility is as simple as:

1. The student-athlete must be a high school graduate or hold a GED.

2. The student must be a full-time student for the current session, defined as carrying at least 12 credit hours

Prospective student-athletes interested in pursuing the junior college route for the first two years of college are encouraged to review the various sections of the eligibility rules for greater detail on the rules that pertain to NJCAA participation.

Jay Johnson, my partner in the writing of the first set of recruiting articles, recently posted a brief recruiting article of his own. Since that happens to coincide nicely with the appearance of this series, I'm including a link to Jay's article here:

The Neapolitan Option Does Not Exist

Maybe the most valuable apsect of the article comes in the comments section where Jay discusses the first thing his wife, a former college student-athlete, gets asked about in job interviews. What people value about your college background isn't always what you would expect people would value.

Throughout your college search process, keep in mind that demand for track and field scholarships varies widely from school to school, even within the same NCAA division and the same event area. The law of supply and demand is always in play where track and field scholarships are concerned. If you are a high-level high school sprinter and not getting any scholarship offers from high-profile sprint schools, it may simply be a matter of the number of sprinters these schools already have on their rosters. It may be that another school with a lower profile may still have very good coaching but far less demand on their scholarships (and therefore much more in the way of scholarship opportunities). Try a phone call or two to a few other schools and see if those calls generate any interest before dousing your hopes.

I regularly get calls and e-mails from college coaches I know (and occasionally from one or two I've never had any previous contact with) about April or May. The coaches contacting me have leftover scholarship money they haven't given out and want to know if I can recommend any athletes who have collegiate kind of ability but haven't yet signed a National Letter of Intent. These calls are definitely not coming from Texas A & M, Oregon, Stanford, Florida State, or Duke, but every year some of these calls and e-mails do come from Division I institutions. There is scholarship money to be found late in the game if you look in the right places.