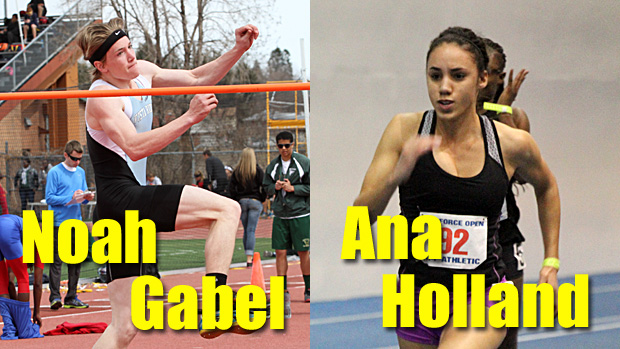 Noah Gabel and Ana Holland opened up April with a couple of huge state-leading marks. Photos by Alan Versaw.

Noah Gabel had a very busy weekend.  The senior from Vista Ridge High School competed in the long jump at the Sand Creek Scorpion Invitational last Friday night (April 5), then returned to the track that next Saturday morning to compete in the high jump, 4x200 and 4x400 at the Palmer Terror Invite. Despite the busy schedule, he was successful and Colorado Track XC honors him as the male athlete of the week.
“The Palmer meet was a lot of fun because it was mainly relays and I like running with my teammates and friends,” said Gabel, who ran a very smart anchor leg on his team’s 4x4 to win the relay in a time of 3:25.82.  That time is a new school record for the senior and also the fastest in the state so far for 5A.  But Gabel’s most impressive performance came the night before.  “My long jump was the best,” said Gabel.
Gabel’s long jump of 23-4 is easily the best long jump in the state so far this season, something that surprised spectators and even Gable himself.  “I wasn’t expecting to be number one,” said Gable.  “I’ve been focused on running relays and doing the high jump.  I did a lot more training in the long jump in the last week and a half working on switching up my steps and I improved it a lot.  And I like the long jump a lot more now!”
Gabel credits this wave of success to his coach and his teammates.  Being a multi event athlete can be extremely challenging but Gabel puts all trust in his coach, Jay Peltier.  “I come from a really great coaching program,” said Gabel.  “Coach Peltier has been coaching for a long time and is really great at training multi athletes.”  And great teammates are as important as great coaches.  “I train with really good athletes,” said Gable.  “Practice is competitive, and we push each other a lot.”
Even though he is a senior, Gabel’s name still sounds fairly new in the Colorado high school track world.  Gable joined his high school’s track team late sophomore year and then was limited by an injury during last year’s season.  He competed at state his sophomore and junior year but he has yet to place at the meet.  It looks as if that is about to change- Gabel’s breakthrough has come just in the knick of time.
On the girl’s side, Ana Holland of Regis Jesuit caught the attention of spectators and competitors, blowing the competition away with her impressive 54.11 400m run at the Mountain Range Mustang Invitational.  This time makes her both the state leader in the event and the Colorado Track XC female athlete of the week.
Holland, now a senior, had a really strong start to her high school career winning the 5A 100 and 400 at the state championships her sophomore year.  Unfortunately, Holland then missed pretty much her entire junior season due to an injury.  “I developed a nagging Achilles pain and was unaware of what was wrong with it,” said Holland.  “I didn’t want to do anything to create an even bigger problem so I decided that it would be best to rest it and figure out exactly what was going on rather than risk it.” This proved to be a good decision- Holland is back for her senior year and is better than ever.
Holland PR’d her first 400 of the season and came out in 100 and 200 times that were very close to her PR.  “It reassures me that I am on the correct path and need to continue to do what I’m doing,” said Holland.  “I am very blessed and excited to be competing again.  I’ve never been more driven to PR.”
And as a senior, Holland realizes that these are her last few races as a high school athlete in Colorado before moving on to run for the University of Virginia.  “Competing as a senior is surreal,” said Holland.  “I remember when I came out my freshman year, it was my first time wearing a pair of spikes and my uniform was too big for me.  It’s amazing to be able to look back and see where I first started and the journey throughout all my years of high school track that led me to where I am today.”
Holland is ready to make this final month count both at the remaining invitationals and of course at the state meet.  “I step on the track to improve from my best performance and beat myself,” said Holland.  “I run my own race and focus on my race plan.  At state I’ll go out with this same attitude.”
Speaking of the state meet, it is rapidly approaching.  With only four weekends of competition left before the State Championships, these last invitationals will finalize state lineups and solidify top contenders.  Colorado Track XC congratulates Noah Gable and Ana Holland as the athletes of the week and extends best wishes to them and all other Colorado track athletes as they begin to set their focus on the state meet.
Tweets by ColoradoTrackXC