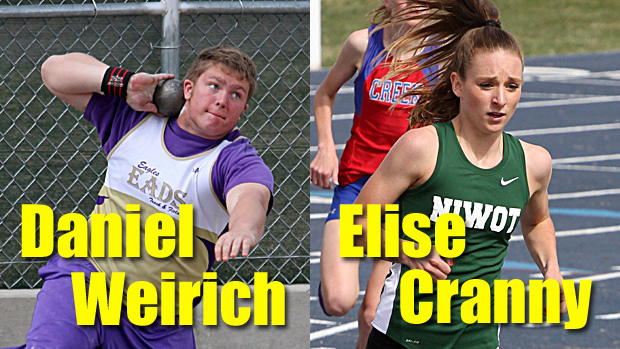 In a week full of superior performances, those posted by Daniel Weirich and Elise Cranny stood out among the crowd. Photos by Alan Versaw.

As always, it was fast competition this weekend at the Mullen Runners Roost Invitational. Elise Cranny was among the very fastest of the fast, running away with individual titles and meet records in both the 1600 and the 800, solidifying her position as the current top distance runner in Colorado and nailing down Colorado Track XC’s female athlete of the week.
Cranny’s name should sound familiar to anyone involved in high school distance running. The junior from Niwot High School had an extremely successful cross country season, winning the 4A state championship, winning the Nike Cross Southwest regiona, and finishing seventh at the Nike Cross Nationals Championships. Cranny continued on into a strong indoor season winning the New Balance Nationals Indoor mile in a time of 4:40. It comes as no great suprise, then, that this success has spilled over into her outdoor season.
Cranny began her day on Saturday by winning the Mullen Runners Roost 1600 in a time of 4:53.13. This time is the fastest in the state so far this season and is also just over three seconds off of Melody Fairchild’s all-time Colorado high school record, a record that has stood since 1991.  “That record has been a goal for me since the beginning of the season that I’ve been working towards,” said Cranny.  “And knowing that Melody holds it and that she is still really successful is really motivating.”
Cranny crowned her day with a blazing fast 800, finishing in 2:09.94. That time, too, is a Mullen meet record and another top time so far for the season. “It’s really exciting,” said Cranny. “I just want to keep dropping my times and keep working hard.”
It is obvious that Cranny has been putting in hard work. She has had an extremely successful season, and that success is expected to continue all the way through the state meet. “I just have to keep the training going and stay healthy now,” said Cranny.
On the men’s side, Daniel Weirich accomplished a lot in a single throw this weekend.  The senior from Eads High School won the shot put Saturday at the (Springfield) Longhorn Invitational with a distance of 61-7.5. That throw represents a PR, a new 2A all-time shot put record, puts him 10th on the all-time Colorado list, and ranks Weirich at a tie for fifth nationally in the event for this season. It also makes him Colorado Track XC’s athlete of the week.
Weirich has been one of the state’s top throwers for a while now. He began his high school throwing career with third place finishes in the shot and discus at the state championships his freshman year.  Weirich then continued on to become the state champion in both events his sophomore and junior years. The expectations for his senior year are high, but Weirich has responded with some impressive performances.
“I came into the shot put looking to throw in the top ten ever for Colorado,” said Weirich, “I knew I needed a 60-11.” Weirich surpassed that mark and found his coveted place on the Colorado top ten.  “Number one in the state is Mason Finley who threw 71 feet,” said Weirich, “to be mentioned with him is very cool.”
But out of all the titles he earned this weekend, Weirich is most excited to be ranked at a tie for fifth in the nation in the shot put. “My freshman year I was ranked in the discus among freshman high schoolers but not among everyone in the nation,” said Weirich. “To be in that category [now for shot put] is cool and humbling at the same time.”
Weirich has just a few throws left for his high school before he moves on to throw for CSU next year. “I still remember freshman year throwing with my sister and one of my best friends,” said Weirich. “At first it’s all for fun, and then it gets serious. It’s been quite a journey.”
And Weirich has some big goals in mind to cap off that journey. “I definitely want to break the all-class state championship meet record which is 67-11,” said Weirich. “I know I can, it’s just a matter of practice, practice, practice.”
Hearing of nationally ranked track athletes such as Weirich and Cranny who come from Colorado is a good reminder of what talented track and field competition this state has.  Colorado is a great place to be an athlete these days. As both Cranny and Weirich mentioned, keep up the hard work and practice, everyone!
Tweets by ColoradoTrackXC