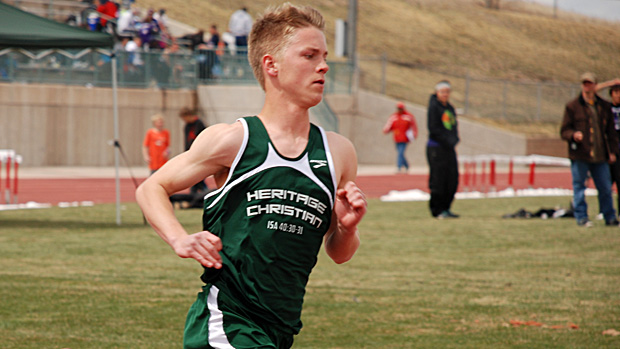 Since the last time we looked at 1A Boys, we have a new leader. Where once the Bethune Bobcats were leading the pack, we now have the Heritage Christian Academy Eagles out of Fort Collins leading the pack.

It's mostly the work of a vicious set of relays and sprinters Joel Barreras and Matthew McGinley. If you take a look at the 1A heat sheets, however, you'll find it isn't all Barreras and McGinley. HCA has four of the nine entries in the 1A boys 200. Barring a DQ-fest at the start line, that means a minimum of 10 points (and probably a lot more) going Heritage's way in that one event alone. They also have three of the four top-seeded relays (and a second seed in the 4x800).

You begin to see why Heritage is wearing the cape of the favorite. Running all those meets against bigger schools in northern Colorado has helped to raise the sites for this team. But this one isn't over yet.

Bethune, for one, still figures to have something to say about the outcome. The Bobcats figure to be hauling in some serious points via distance runner Alex Duarte and hurdler/jumper John Strobel. But, it's suddenly evident that Bethune will need a huge three days of state from the supporting cast as well.

The southeastern contingent of Holly, McClave, and defending state champion Walsh all have a glimmer of a hope as well. But, even more than Bethune, these teams need a perfect storm of things going right to come out on top.

Holly sends Jason Barth, Manuel Tarango, and a complete set of relays to the state meet. Those relays must shine.

Closer to the Front Range, Elbert fields a nice team as well, but are--like the others--caught up in a numbers game. Blake Nicholas had to trim a couple of events just to get into the state meet. Caleb Brown ranks among 1A's best throwers, but after these two, Elbert still needs a few points in bundles, but those points appear to be coming in nickels and dimes.

Events not to be missed:

200 meters - This one has all the big guns of 1A boys sprinting--Gabe Longworth, Manuel Tarango, Barreras, and McGinley. Cole Caynoski of Vail Christian may be another one to take a close look as well. Should be fast, should be fun.

110 hurdles - John Strobel of Bethune versus Koy Palmer of Granada. Both guys live closer to Kansas than most of Colorado, but it's for the Colorado 1A crown of hurdling.

Discus - Andrew Perry of Otis and Caleb Brown of Elbert should be able to put on a very entertaining show of flying discs.

4x400 - Seeds make it appear this one isn't likely to be real competitive on the track, but Heritage Christian could be taking aim at a very good 1A state record currently owned by Walsh. Put a stopwatch on this one. If there's a team in this field that can run with HCA, it's McClave.