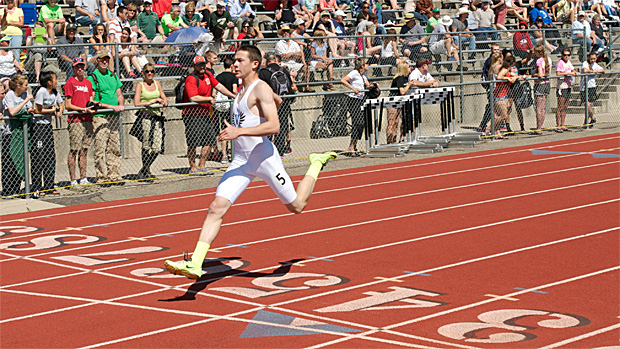 It was a huge day one for the Pueblo South girls. The Colts, who seemed to be teetering on the edge of dropping out of contention for the 4A girls title, got a couple of key wins from Angelique Urenda in the high jump and Aly Ary in the triple jump. Tyra Cruz added a third in the shot put. All that, combined with an advancement to finals for the 4x200 and a point from the 4x800 made for a big day one for South.
At this point, the 4A girls favorite Thompson Valley is probably just a shade behind schedule. High jump favorite Lindsey Kroboth slipped to a tie for sixth. Although TV won the 4x800, two other relays failed to advance to finals. The Eagles need day two to go better than day one.
Day one went well enough for Valor Christian, Sand Creek, and Niwot. Valor's Marybeth Sant easily topped the field in the 100 and 200 prelims, and both Aimee Larrabee and Haley Showalter scored in the shot put.
Sand Creek got a bit of a scare when Rebecca Harris whacked a hurdle, but she managed to recover quickly enough to advance to finals on time. Hayley Gannt and the 4x200 advanced to finals, while Mariah Walker claimed the shot put title as expected.
For Niwot, there was a second place in the 4x800 and advancements to finals for the 4x200 and SMR8.
Among the boys, Valor's 4x200 smashed the Colorado all-classification record in that relay. Sprinters Greg Popylisen and Christian McCaffrey made it forward to finals in both the 100 and 200, although Popylisen was seen limping slightly following the 200. Spencer Jamison has the second-best time in 400 prelims.
Vista Ridge was similarly successful in advancing their sprinters, hurdlers, and 4x200 to finals, but the advancements didn't come with the same kind of exclamation points as they did for Valor. The situation admits of multiple interpretations, but--regardless--Vista Ridge is still very much alive and in the title hunt.
Coronado's win in the 4x800 keeps them on schedule as they wait for another day to post most of their points.
Tweets by ColoradoTrackXC