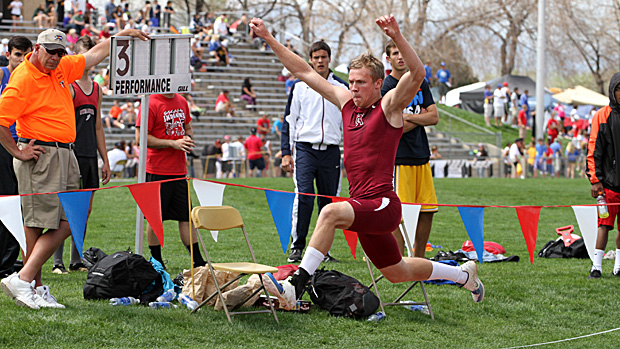 Collin Scheer leaps to a triple jump title and a PR after missing most of the season with an ankle injury. Photo by Alan Versaw.

The Classical Academy came into the meet knowing that both teams could make serious runs at state titles. And it seemed nearly every time a 3A awards ceremony happened on the opening day, there was some TCA maroon on the podium. In fact, both teams finished with the lead after Thursday.

The dice rolled the right way for TCA in two of the boys’ finals. The 3200-relay team came in seeded fourth and it appeared as if they would finish third down the home stretch, but in the last 10 yards Pagosa Springs’ anchor leg fell to the track, allowing TCA’s anchor to slip past for second.
Triple jumper Collin Sccheer was injured most of April and May but was able to get healthy enough to qualify for state at the league meet last week with a one legal jump that barely got him into the field. Sheer was the top returner from last year’s state meet, finishing fourth, but he came in seeded 11th. He pulled out the win in his last jump of 44-00.75.
TCA picked up points in the 3,200 with Conner Wilburn’s fourth-place finish. They also set up well for points with the two fastest qualifying times in the 400 (Clark Mourning and Nick Deray). They also qualified the 800 relay for Saturday’s finals.
The Coal Ridge boys did not have their best day, but are still in a place to give TCA all the contest they can handle. Andy Bowles and Trevor Kelly made the 110-hurdles finals, although it will be interesting to see how Bowles does the rest of the week in the hurdles and high jump after limping off the track in the prelim.
The CR Titan’s Jorge Hernandez owned the third best time going into the 100 but finished with a DNS next to his name (either a false start or he was pulled in favor of helping strengthen a relay). He was the third-best qualifier in the 200. The CR Titans turned in the second best time in the 800 relay. They are considered near locks to qualify for the finals 400 and 1600 relays, but anything can happen in relays. Finally, Raul Oyarzabal qualified fifth in the 400 for the Titans.
Individually, James Irwin’s Miguel Molas ran the fastest qualifying times in both the 100 and 200. Sterling’s Truitt Parrish set a new state meet record in the pole vault at 15-01. Ellicot’s Alex Hill continued his dominance in the discus with a winning toss of 166-11, nearly twenty feet better than second place.
On the girls side, TCA was scoring points everywhere and setting up some future potential. As expected, the Titan’s 3200 relay team dominated the field for a win by seven seconds. The TCA Titans also picked up points from Megan Brunette (second) and Katie Knapp (seventh) in the 3200.
Alexa Chacon has the potential to get a collective “whoa she’s fast” from the crowd on Saturday in the 100 hurdles. In prelims, she broke her own state meet record by .23 with a 14.65.
The Eaton ladies have been the fastest 3A team all season. They qualified four girls in the finals of the 200, one in the 100, one in the 100 hurdles and two in the 400. They also had the best qualifying time in the 800 relay and the third best in the 800 sprint medley.
Individually, Pagosa Spring’s Taylor Strohecker won the high jump. Bayfield’s Eva-Lou Edwards dominated the 3200 with a time of 11:03.43.
Tweets by ColoradoTrackXC