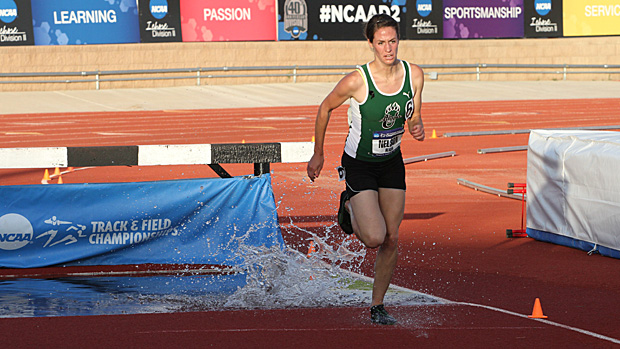 Although recent years have run a bit on the lean side for the western slope as a whole, the region has anything but an impoverished cross country history. Let's take a closer look.

Grand Junction, coached by 2012 Pikes Peak Ascent winner Kim Dobson, enjoyed their best season in at least a decade last fall and could be poised to make a return to the big time of Colorado high school cross country.

Twenty years ago, Durango may have been the best cross country team in Colorado on a year-in and year-out kind of basis. Between 1986 and 1999, under legendary coach Ron Keller, the Demons won seven state titles and came close to winning a few more. From 1984 to 1998, there was only one year that Durango missed having a state top-ten finisher (and they had an 11th that year). Most of those years, they had multiple top-ten finishers. In those days, it was a given that you'd have to conted with Durango to win the state meet.

Other western slope 4A schools include Palisade, Montrose, Rifle, Delta, Glenwood Springs, and Montezuma-Cortez. Between them, they have one state title--Montrose's 1985 girls title--and a few additional high points, but it is difficult in the extreme to counter the high-octane tradition of Durango cross country.

Among the western slope 3A programs, Moffat County has the pedigree. Until recently, Moffat County was a 4A school, but recently moved down to 3A due to declining enrollment. Between 1962 and 2000, the Bulldogs won eight state titles, including a matched set of titles in 1992. It's a short list of schools that have won a boys and a girls cross country title in the same year (although three schools did it in 2010 alone). Moffat County is also among a very small handful of schools to have won a girls state team title, a boys state team title, a girls state individual title, and a boys state individual title. Unlike most schools on that list, however, the Bulldogs got it all done in one year, 1992, under coach Randy Cooper.

On the lengthy list of Moffat County cross country alumni, Clint Wells is probably the most recognizable name. Wells won his individual title in 1992 before going on to a storied collegiate and professional career. Alicia Nelson, who just recently won NCAA DII national cross country and steeplechase titles in the same school year would also warrant strong consideration for Moffat County's most illustrious cross country alum.

Gunnison also owns a state title, won by their 1997 girls team. That title effectively ended the Clear Creek domination of 3A girls cross country. Pagosa Springs owns the distinction of having five state runner-up teams but never winning a state title. Bayfield won a boys team title in 2005. Steve Flint was an individual titleist for Bayfield that same year. Olathe has historically been a small program among 3A schools. Coal Ridge and Grand Valley are relative newcomers to the Colorado cross country scene and still taking out their territory within the classification.

Meeker, Mancos, Rangely, Dolores, Hotchkiss, Paonia, Ouray, and Debeque make up the western slope's 2A representation. Mancos has been at cross country for a good while--even before they had a team, as a matter of fact. 1997 4A individual champion Reagan Robb of Durango actually attended Mancos High School. Doubtless his success was part of what would eventually lead to Mancos having a team of their own.

Hotchkiss dealt with a couple of girls runner up finishes in 3A before moving down to 2A last fall and cleaning house for the school's first-ever cross country state title.

I probably could have lumped Ouray in under the mountain schools, but they also fit under the heading of western slope. The primary claim to fame of Ouray cross country is Ray Harvey. In addition to absolutely dominating a couple of state meets back in 1986 and 1987 and owning the 2A 3200 record until just a couple of years ago, Ray Harvey was a household name for a long while in  grueling events like the Imogene Pass Run. I heard once, but haven't been able to confirm, that Harvey once summitted all of Colorado's 14ers in a time span of something like 16 days.

Paonia and Dolores were newcomers to the state cross country scene last fall, and both showed considerable promise for new programs. In a sense, both of these programs represent offshoots of the success of nearby programs Hotchkiss and Mancos, respectively.

In southwest Colorado, Montezuma-Cortez, Mancos, Durango, Bayfield, and Pagosa Springs have regularly hosted meets in the past. This year, Durango and Bayfield are joining forces on a single meet to be held in the National Forest just outside of Bayfield. That reduction of one meet in the San Juan Basin likely means a little more travel for the region's schools this fall.

Mancos has what amounts to very nearly a cult following for their home meet. It runs on cross country ski trails in the National Forest up above town. Times are never all that fast, but schools keep coming back for more. Every so often, this meet turns a little muddy. Nobody seems to mind.

Pagosa's meet has moved around, both in terms of location and in terms of difficulty, over the years.

On the high end of scenic lies the Ouray meet at Ridgway State Park between Montrose and Ridgway. That meet typically runs in mid September. But, as is often the case, scenery comes at a price. In this case the price is lots of hill climbing at high altitude.

Montrose hosts a relays meet during league meet week each year. Since there isn't much in the way of league meets to be found on the western slope, the relays design of the meet gives schools something low-key to go to help keep things sharp heading into regionals without spending too much energy.

Like Montrose, Rifle hosts their meet during league meet week, but Rifle runs a conventional invitational. No relays, just one race for each gender. There's plenty enough western slope for two meets that week.

Delta's meet is hosted on the Delta Speedway at Confluence Park where the Gunnison and Uncompahgre Rivers join forces. The Uncompahgre loses its name there in Delta, and the merged rivers make a run for Grand Junction where the Gunnison loses its name. Fortunes of river names aside, the Delta Speedway course has seen a few configurations over the year--some a little faster and some a little slower, but all more or less flat, hard, and fast. The Delta meet opens the season for the western slope schools that don't venture over the Continental Divide for the pre-state meet. In my personal experience at Confluence Park (which doesn't happen to coincide with cross country season), biting flies can be an issue. On those days, there would certainly be a little extra incentive to run fast.

Moffat County annually hosts a meet at Loudy Simpson park. I don't know much about Loudy Simpson (sometimes written Loudy-Simpson), but it may be two people. In any case, a park, an ice arena, and a sports complex all go by the same name there in Craig, so there's probably a story about a sports benefactor of days gone by behind the naming of the park. In any case, it's a lightly-attended meet that typically draws a team or two from Wyoming as well. Craig isn't exactly the cross country center of the universe, despite the fact that Moffat County has turned out some pretty good teams over the years.

Over the years, Gunnison has hosted their meet in different places in Gunnison. The Cowboys typicall draw from Delta County to the west, from Chaffee County to the east, and from the San Luis Valley to the south. Hosting a meet keeps Colorado's kings and queens of travel home for one weekend during cross country season. Whether or not that weekend is typically Gunnison's homecoming weekend is a question I can't answer. Instinct whispers in my ear it's a little more complicated than that for the cross country kids at Gunnison, though.

Glenwood Springs hosts a meet that has recently moved to the soccer fields of the Glenwood campus of Colorado Mountain College. Suffice it to say that the course is a good deal tamer that its counterpart at the Leadville campus of Colorado Mountain College. Glenwood does, however, do very well at pulling Front Range teams over the mountain. Perhaps the year-round swimming pool in Glenwood has something to do with that.

Hotchkiss hosts a meet that's about as different from Glenwood's as meets get. Hotchkiss is as hilly and devoid of grassy as Glenwood is flat and grassy. At least in some years, Hotchkiss has a citizens race in conjunction with the high school races. There are several nice things about that, but not the least would be an adult appreciation for what the kids get to deal with.

And, finally, Grand Junction and Central both hosts meets in flattish, grass-and-sidewalk kind of parks in Grand Junction. The parks in question would be Long (Central) and Canyon View (GJ). Both are early season meets.