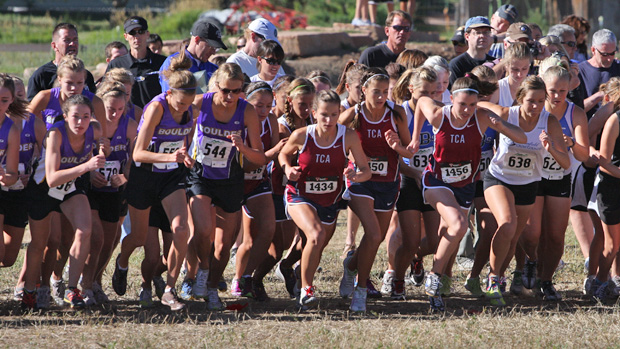 It's always competitive as soon as the gun sounds at the St. Vrain Invitational. Colorado Track XC file photo.

The cross country tradition in this region is about as deep as it comes.

The list of teams of cross country royalty is lengthy here, so let's get straight to the task at hand.

It isn't a long list of 5A teams, but it is an impressive list. It goes Boulder, Fairview, Monarch, and stop. Although Boulder owns only two state cross country team titles (both boys titles dating back to the 60s), the Panthers have accumulated an impressive list of individual state champions, to include Kelsey Lakowske, Melody Fairchild, Paul Kent, and Alex Furman. At least that's the list since the races went to three miles (and eventually to 5K) in 1977. The legends of Lakowske and Fairchild, of course, extend well beyond the borders of Colorado as both were high-level finishers at Foot Locker finals. And, in Fairchild's case, that's a gross understatement.

Monarch, of course, owns the two most recent girls titles, winning in 2011 and 2012. Kirk Webb won an individual title for the Coyotes in 2011.

Year in and year out, these three schools are among the top cross country programs in the state.

Nearly the entire St. Vrain Valley School District, plus Fort Lupton and Centaurus, makes up the 4A contingent from this region. The list of St. Vrain schools includes Mead, Skyline, Frederick, Erie, Silver Creek, Longmont, and Niwot. State titles are a little thinner in this group, though the Centaurus boys posted their memorable boys triumph in 2011. Longmont has two boys cross country titles dating back to the 1950s. Aside from that, we're down to individual champions.

Since the three mile race distance came in, Stacy Crystal and Jennifer Ward have won for Longmont, Michelle Walles for Erie, and Elise Cranny for Niwot, and then the well runs dry. Niwot's David Perry came the closest to winning of any boy from this region in recent years with his second-place effort in 2009.

Niwot has enjoyed a run of several solid years in succession and is probably the closest thing to a regular powerhouse this region has produced at the 4A level.

It's lonely being 3A in Boulder and southern Weld Counties. As of this writing, Peak to Peak is the only 3A team in the region, though both Mead and Lyons have had recent stints at 3A. Peak to Peak has acquitted itself well as a cross country program over their relatively short history. They have a second-place girls finish in 2007, a third from 2008, and a boys second from 2012. Not bad for a school with about 10 years of cross country history. They do, however, seemed to have ditched the Peak to Peak blue in favor of black uniforms. My guess is that those black uniforms got a little toasty  at the Cheyenne Mountain Stampede last fall.

Lyons is the showpiece 2A franchise for this region. For a long time, Lyons was the team that always finished second, but they may have turned the corner on that as of last fall. After seconds in 2007 (boys), 2008 (boys), 2010 (boys and girls), and 2011 (boys), Lyons finally snared a title in 2012 with their boys team. Staying loyal to their own history, however, the girls finished second in 2012.

Alexander Dawson and Shinging Mountain Waldorf are the remaining BoCo 2A entries. Though both are small schools, both have seen decent measures of cross country success, to include a third-place individual finish by Birdie Hutton in 2011.

The BoCo region gives up nothing to any region in the state in terms of meets. Several of the state's best invitationals are held annually in Boulder County.

Although Liberty Bell still rates as the most-publicized meet in Colorado, the St. Vrain Invitational draws closer every year. Last year, the St. Vrain Invite hosted over 2500 runners (including middle school contestants). The girls large-school race featured an early season showdown between Fairview, Boulder, Monarch, The Classical Academy, Pine Creek, and several other traditional 4A powers. The boys large-school race gave us a nice preview of the state showdown between Mountain Vista and Fairview. But, you'd better be able to move around fast at St. Vrain, because they clear their course and start new races on 25-minute intervals.

Pat Patten, hosted by Boulder, is probably the second-biggest meet in the region. Although Boulder hosts, it's right in Fairview's backyard at Viele Lake Park.

Coming in at #3 would be Centaurus, with their invitational at Waneka Reservoir in Lafayette. It's a flat, hard, and fast course that typically produces some nice early-season matchups.

Mead and Erie have been fairly consistent in recent years about hosting meets of their own.