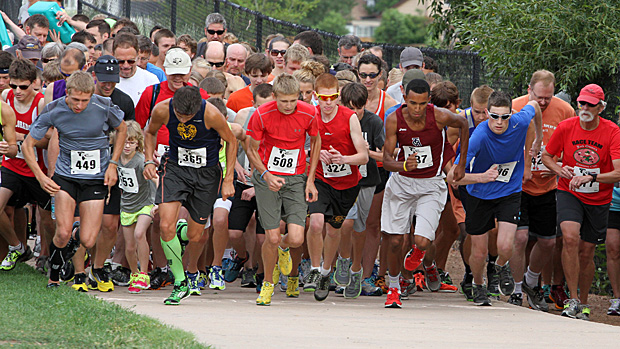 On a gloriously cool August morning in Colorado Springs, a whole bunch of high schoolers got just a little taste of cross country.

As far as summer races go, things don't get much better for the high school cross country crowd that the Run for Rwanda. The race makes youth entries available for only five dollars. The course (a mix of sidewalk, grass, and mostly crushed rock trail) is more cross country than road race. The hand-made awards are beyond cool. And the race raises money for causes only the most callous of heart could even think of arguing with--a health clinic in Rwanda, tuition assistance for Rwandan children to attend high school, and livestock for impoverished Rwandan families.

So, it's no suprise that each year, the list of schools with significant contingents showing up at this race grows a little. If you recognize names well, you'll know that Palmer Ridge, Rampart, Evangelical Christian Academy, and The Classical Academy each had several runners participating in this race. For Rampart and The Classical Academy, the participants even included several cross country alumni.

Last year's order of finish went Tucker Hamilton and then Josh Simkins. Apparently, Josh Simkins has a long memory because he didn't let anything like that happen this year. Simkins staked out an early lead and never let anyone close. The Western State redshirt sophomore also took down the course record in 16:20. Hamilton finished an easy second, followed by the top current high school runner, Conner Wilburn, in third.

Last year's Run for Rwanda, held under similarly splendid conditions to this year's, had no female finishers under 20:00. Lauren Hamilton made certain that didn't happen again this year, finishing just under the wire in 19:59. Last year's female winner, Seattle Pacific-bound Claire Rachwitz, finished second in 20:16. Her place on the Rampart varsity just might get taken over (in another year) by the #4 female in the race, Lilliana Hamilton.