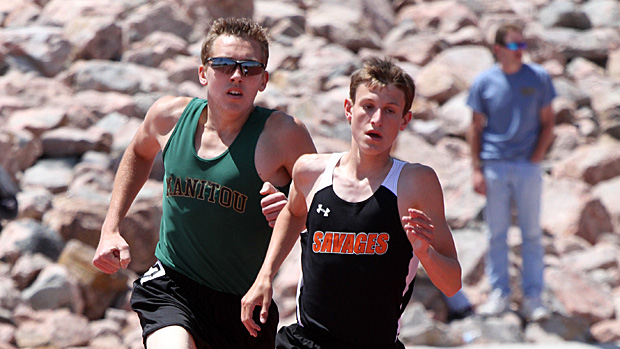 Manitou's Marcus Rodholm made life uncomfortable for Josh Davis in track season, and it appears Rodholm will be back to haunt Davis's steps in cross country season. Colorado Track XC file photo.

For those dying to get a race in before the start of official fall practice, this weekend provided plenty of opportunity.

We'll begin with the Fort Collins Team Time Trial, officially known as the Ault Rat Race. It's a road race, and so a bit faster than most cross country courses, but it's still worth noting that the Lambkin Legion had six guys under 17:15 and eight girls, led by Lauren Gregory, under 20:00. To put that into perspective, most cross country teams in the state never see eight girls under 20:00 at any point in the season, let alone coming into the season. FCHS has thrown down the gauntlet again.

For those needing more than a mere 5K to satisfy the urge, there was the Georgetown to Idaho Springs Half Marathon. This is the dowhhill affair that keeps the Clear Creek High School athletic programs in the black. The list of current high school athletes competing at this one is kind of short, but we did find Mountain Vista's Tyler Matzke at 1:22:44 and Greeley West's Katie Lyons at 1:35:40. This was at least the second consecutive year that Lyons has run the race. Frontier Academy coach Brett Shanklin ran 1:26:35.

Continuing the theme of higher elevation, if you had the stomach for it, you could drive past the scene of Friday's terrible flooding and run in the Mayor's Cup 5K in Woodland Park. The event also has a 10K division, but I didn't detect any current high school names in the results of the 10K. Among the 5K finishers, however, was Falcon junior Alex Haberkorn. Actually, Haberkorn was more than a finisher; he was the winner. Running over hills and at over 8000 feet of elevation, Haberkorn completed the course in 17:55. Manitou Springs brought a contingent up as well and was led by Marcus Rodholm in 18:46. If Rodholm runs cross country this fall as a senior, I believe it will be his first season of cross country. The top female high school finisher at this event was Savannah Ebhert of Woodland Park at 22:10.

Littleton had a Pancake Stampede 5K. In this race, apparently, you are stampeded to resemble a pancake if you take a place on the front of the starting line without legitimate 16-something credentials. Honestly, I'm surprised that doesn't happen more often. In any case, Dylan Thompson (Chatfield) and Megan Cooney (Rock Canyon) took top high school honors at 19:42 and 20:04, respectively.

There were no obvious high school competitors in the Denver Aids Walk Colorado, but it's clear from the results that they weren't all walking.

The East End 2K in Boulder saw Tabor Scholl running 6:34. Tyler Scholl and Logan Simington represented the middle school contingent at 6:14 and 6:42, respectively. For those of you reaching for your conversion calculators, I cut the process short; Tabor Scholl's time converts to a 5:23-ish mile pace. Tyler comes in at 5:07, and Logan Simington at 5:30. Since it was advertised as East End (of Boulder), we can presume the course was reasonably flat.

The Firehouse 5K was the place to be for a few Denver North runners, and appropriately so since the race benefits Denver North High School. Jairo Tiscareno won the race at 17:19, followed by teammate Jeffrey Lazo at 17:56. TCA's Megan Percy won the female division with a time of 20:50.

Ben Butler of SkyView Academy separated from the field and wasn't heard from again until the finish line of the Parker So Long to Summer 5K, winning in 17:11. If Butler runs again next year, they'll be renaming the race to the "Parker So Long, Everybody 5K." Landon Rast, a local middle school talent, finished third in 19:21.

Other race results I'm waiting to see from this weekend are now down to the Holy Cow Trail Stampede. This article will be updated when and if we see those results.

And, of course, if there were more races around the state we didn't already know about, please feel welcome to fill me it at the e-mail address in the bottom left corner of this page.

It didn't happen this weekend, but I'll give you a link to an article about a race in the San Luis Valley last Saturday that tells you something about the kind of summer Jericho Ulibarri, Brianna Apodaca, Chance Canty, Isaiah De La Cerda, Olivia Hayden, and a few others have been having: Glory Days 5K. If La Jara doesn't register on your mental reference of Colorado place names, it's flat, about 15 miles south of Alamosa, and at 7500 feet of elevation.