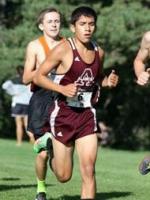 2017 Pueblo Twilight: Highlights Day And Night...
Tanner Norman and a group of familiar, but friendly, rivals from the Colorado Springs area embark on a little history-making adventure....

Progression Of The Class of 2017: Boys Distance...
Max Martinez has been among the most consistent and the most versatile of the distance performers in the class of 2017 over his high school career....

Where Were Colorado's Top Senior Boys in 2012?...
Isaiah DeLaCerda is one of a small handful of top senior boys this year you might have projected from the 2012 middle school state meet and the USATF-CO 13-14 championship race of that year....

2016 USATF-Colorado Junior Olympic Cross Country Champi...
Easton Allred posted the big high school age performance of the day, winning the 15-18 boys race in 16:34 and leaving a few folks wondering what might have been. Photo by Erin Percy....