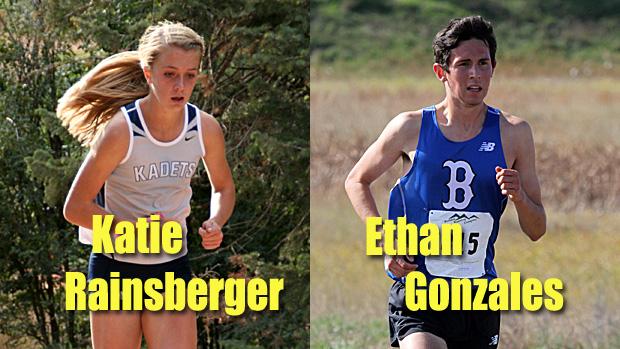 State week is finally here.
The invitationals are over and regional champions have been crowned.  Next stop: Colorado Springs for the 2013 Colorado Cross Country State Championships.
Last week saw many amazing performances at the various regional races as teams and individuals made their attempts at securing a spot on the line at Saturday’s races.  Out of all the fast finishes, however, Colorado Track XC recognizes two athletes who stood out from the rest.
Katie Rainsberger made quite the statement at the 4A Region 2 championships on Thursday.  The sophomore of Air Academy High School won by a staggering 55 seconds with a 17:39 finish and also helped her team clinch the regional title.
“I had a pretty decent lead by the first mile marker and just focused on trying to run my own race,” said Rainsberger.  “I just wanted to run well for the team because there wasn’t a lot of individual competition.”
Rainsberger has one-upped her extremely impressive freshman seasons in both cross country and track and field with an even more solid sophomore showing.  “I’m really happy with my season because I think slow, steady progression is important through training,” she said.  “I’ve dropped ten seconds off my time at altitude since last year.  You just have to keep going and stay focused.  I’m really excited for state.”
After just barely missing the 4A state title last year in an excruciatingly close finish against Elise Cranny, Rainsberger is eager to see what this year’s state championships holds for her.  She’s bringing in some lessons learned from last year: “I’m definitely going to race all the way through the line this time,” Rainsberger said with a laugh, and she’s also ready to be on the start line with Cranny again.  “Elise is such a fantastic runner and she’s so on top of her game right now.  I’m not there to win.  I’m there to better my time from last year and compete with the top runner in the nation.  And if I get to say I got second to the best in the nation, that’s not bad at all.”
But regardless as to what happens with her individual performance, Rainsberger is really excited to see what comes from the team results.  After just edging out The Classical Academy by one point to claim the Regional title, the Air Academy girls have a sweet shot at a state championship.  “We have a really solid one through four,” Rainsberger said.  “2, 3, and 4 all run close together and I think they could all break 19.  And if our fifth runner has a good day, we have a good shot.  We’ve all been working really hard for this.”
On the boy’s side, honors go to Ethan Gonzales of Broomfield High School.  The senior won the 4A Region 3 race in a season-best time of 15:49.
“My coaches had told me to sit back and chill so I hung back behind for the first two miles,” Gonzales explained.  “After the second mile my coach said green light’s on and I just started going from there to the finish.  It was a good race and a lot of fun.”
Running a season best this weekend even when instructed to keep the brakes on was a huge confidence booster for Gonzales going into state on Saturday.  “This season has been lots of really, really heavy training,” he said.  “I’m coming off some of the best workouts I’ve ever done and this race was really good.  The 15:49 felt easy and controlled and if I’d been instructed to run faster it could have been even better.”
Nothing will be holding Gonzales back this weekend, however, especially as there is some tough competition in the 4A field this year.  “The state meet is going to be a phenomenal race,” Gonzales said.  “There’s Bailey Roth who I respect a lot after finishing second to him in the 3200 at state in track.  He’s a really good runner.  Then there’s Liam Meirow from Summit, who’s also a buddy of mine.  It’s going to take a really hard effort and good day to be successful.”
Also motivating Gonzales to a superb race on Saturday will be the fact that he’s leading his team to a potential state championship.  The Broomfield boys ran exceptionally well at Regionals, placing first and looking like real team title contenders.  “The coolest part about the whole race on Friday,” Gonzales said, “was finishing and turning around and seeing my teammate coming in second.”
That passion for his team will be major inspiration for Gonzales out on the state course.  “Two years ago we had a really good team and were ranked first in the state the whole season but ended up finishing second,” he said.  “Ever since then I’ve wanted to win that team title.  Everything seems good right now and when I’m out there running, I’m running for my teammates.  I hope they’ll be doing the same for me.”
And so with three days to go until the big day, Colorado Track XC wishes all of Colorado’s high school runners the best of luck in their final preparations for the 2013 championships.  A special congratulation goes out to Katie Rainsberger and Ethan Gonzales on their efforts this week- best wishes to them and their teams on Saturday.  Rest up and race well, Colorado!
Tweets by ColoradoTrackXC