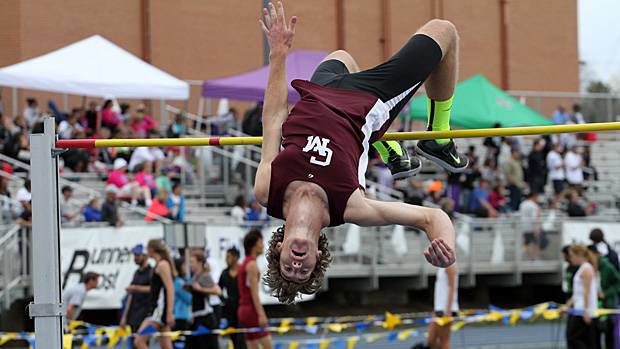 Colt Sessions leaves no room for doubt at 7-0. All photos by Alan Versaw.

If you've hung around the Mullen Runners Roost for a few years, you know big marks are more or less the norm. What we saw yesterday, however, exceeded the norm.

All but for the 200s, the winds cooperated throughout the day, adding a pleasant feel to a not-too-hot, not-too-cool kind of day. But, the not-too-hot part had a whole lot more to do with the ambient temperature than the performances on the track.

Without really specifically trying to be, the Mullen Runners Roost has become something of a distance event mecca. And, it was a loaded field that took the line in the girls 1600 invitational heat. For the first three laps, it was West Grand's Tabor Scholl who kept the field and the pace honest. Looking perhaps a little sharper with a little less racing on her 2014 resume, Scholl opened a lead and threatened to blow the thing open by lap number three.

But, sitting just a few strides back with ideas of her own about who should win this race was Cherry Creek's Jordyn Colter. Colter surged hard on the final lap and had just enough to get by Scholl down the finish straight. Colter would take the win in 5:01.84. Darby Gilfilland edged Riley Cooney and Ali Deitsch in a very close battle for third, less than two seconds behind first and second.

Less than half an hour later, the boys 1600 invitational took to the same eight lanes. It didn't take long for Liam Meirow and Ethan Gonzales to break from the field, with only Daniel Book making any sort of legitimate attempt at maintaining contact after the initial lap, which rolled throught at about 63 seconds.

Meirow maintained his lead through laps two and three, but Gonzales never faltered staying right off the Summit senior's shoulder. Gonzales made his move on the back straight of the final lap, surging decisively into the lead and looking, for the moment, like he might take the win by 10 or 20 meters. Somebody, however, forgot to inform Meirow of that part of the script.

Meirow counter-surged and moved back into the lead on the final turn. The final straightaway was more or less a full-out sprint as Meirow fought to hold off yet another charge from Gonzales. At least twice, Meirow glanced back over his shoulder to check on the position of Gonzales, but the over-the-shoulder checks ultimately did no harm. Meirow had enough in the tank to hold off the threat. Meirow would cross the line in 4:15.88, with Gonzales in second at 4:16.73. The finish would give Meirow Colorado's #1 ranking, but there's nothing comfortable about that position at the moment, just more threats to come. 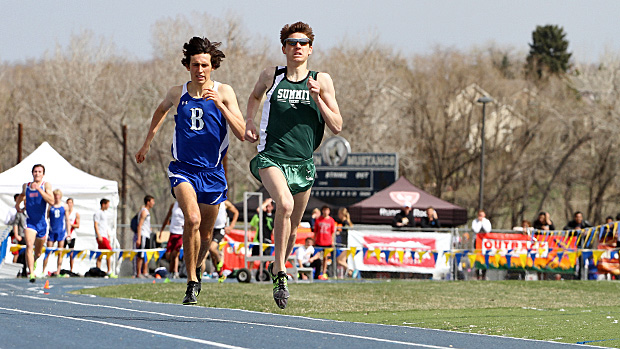 After the race, a visibly spent Meirow admitted, "It's scary out there. I don't have the confidence I should yet, so I looked back." Would that we all could answer our inner doubts and fears in the fashion Meirow did over the final 200 meters of that 1600.

Following the 1600s, the meet and the crowd took some time to exhale. There were smaller peaks of excitement, as with Shayna Yon overtook Dior Hall in the final few steps of a very fast 200, 11.91 to 11.96, but a whole lot of anticipation was fixed on the girls 800. Anyone who had read the heat sheets had an idea of what was coming.

Before we could get to the 800, however, there were fireworks at the boys high jump. It's been several years since Colorado has seen a 7-0 high school high jumper, but Colt Sessions ended that drought at 1:40 PM. And, there was no rattling of the bar, nor any moment of bated breath where everyone watched to see if the bar would stay on. This one was clean, clean, and convincing. Sessions' third attempt at 7-2 provided a second moment of hope, but the 7-0 clearance would remain, at least for the time being, his personal best.

And still the crowd waited. Finally the moment came.

The invitational heat of girls 800 put Elise Cranny to the start line. With a big stage, as Colorado meets go, Cranny would have a field capable of pushing her for at least part of the distance.

Cranny went out conservatively, passing through the 200 at between 32 and 33 seconds. But, with Cranny's reputation firmly in place, nobody had the first inkling of trying to take the lead from here. Claire Green and Jordyn Colter, however, dared to stay right on her heels.

At the 400, it was 66 seconds and hopes for a big time seemed to be fading, but tucked away in the minds of all who saw last year's 4A state 800 was the memory that Cranny had gone through the 400 in about 67 seconds on that brilliant day in May. 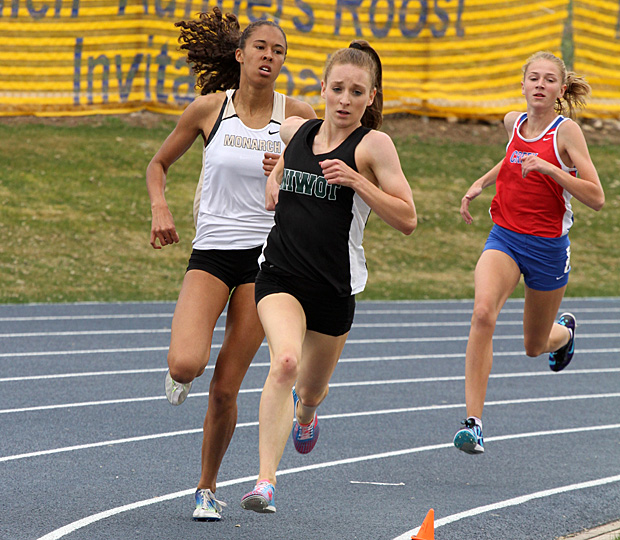 And, perfectly on cue, Cranny stepped on the gas at the 400. The pursuit of Green and Colter withered. Cranny's lead grew with every stride. Several hundreds of people watched in eager anticipation, one eye on the track, one eye on the watch.

Cranny finished in 2:08.67, a little off the Colorado state record, but certainly close enough to remind all that the game is very much on. And, for this day, is was easily good enough for a Mullen Runners Roost Invitational record.

Asked about her race later in the day, Cranny offered, "Those splits were the plan, however I was hoping for the first lap [to be] a bit faster. I am trying to get better at controlling my first 200 and make sure I have the strength to finish strong over the the last 400..... The pace shift at 400 was intentional."

If you're racing Cranny at 800 meters, that doesn't leave you a lot to look forward to at the end of the first lap.