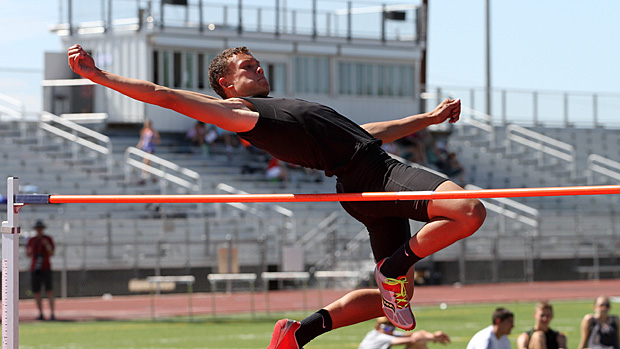 It's already been noted that the Colorado State Pentathlon meet does not accompany quite the ordinary set of pentathlon events. For girls, the Colorado State Pentathlon meet means competing in the 200, 800, long jump, shot put, and high jump. For boys, the same set of events applies except that the discus replaces the shot put and the 1500 replaces the 800. 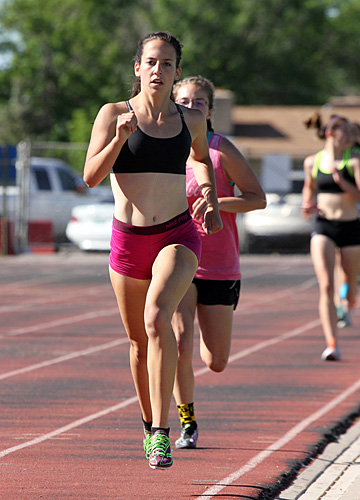 Whether it was an 800 or a 1500, however, the heat of the day was in no mood to be forgiving by the time the athletes reached their final event. A few athletes did not complete the full round of five events, and several more labored through the longest race of the day.

Along the way, the field events carried familiar names, but unfamiliar rules. Contestants were limited to two attempts each in the long jump and shot put or discus. Contestants had a total of six available attempts in the high jump, but two consecutive misses cancels you out of that competition as well.

With only two available attempts, there is a high premium on getting a "safe" mark on the board and then trying for something that scores a little higher on the second attempt. If some of the marks posted by athletes seem a little shy of typical efforts for those athletes, that may go a long way toward explaining the discrepancy.

Despite all that, Fairview's Heather Harrower (photo, left) had no serious rivals to her throne. Harrower successfully defended her 2013 title with the top times in the 200 and 800, top five marks in the long jump and high jump, and a top-nine shot put mark that was a little better than a full meter farther than what she threw in 2013. Harrower's 3224 points was nearly 300 ahead of her 2013 total. And her 2013 would would have won again this year.

Joscelyn Wind, Ashlyn Nolan, and Taylor Buschy rounded out the top four for the girls.

The boys event encompassed a little more mystery in its earlier stages. There was no Heather Harrower on the boys side who would dominate the first event and remain in the lead throughout the scope of the competition.

Greeley Central's Nick French, however, made a big surge in the discus, scoring 723 points with a throw of over 130 feet. Caleb Simons had the big clearance at the high jump with a mark of 1.82m and 644 points. Going into the final event, Simons seemed poised to win the competition, but his absence from the 1500 left him with 2323 points, well short of the total needed to win.

While Ethan Maurer continued to have a nice day through the five events, he would eventually be caught an overtaken by a young man having a still nicer day, Parker Strahler of Castle View. Strahler recorded the top long jump mark at 6.27m, the #6 200 mark at 23.31, the #11 high jump mark at 1.62m, and the #7 discus mark at 29.57m. In the final event of the day, Strahler recorded a 5:01.06 1500 to take ninth in that event and claim the overall title.

Maurer would end up in second, with teammate Nick Coleman claiming third and Zac Bitton of Greeley West in fourth.

Harrower's title of two year's running will fall into new hands next spring as she has completed high school. Strahler, however, is only a junior this spring and could potentially come back to defend his title next year.