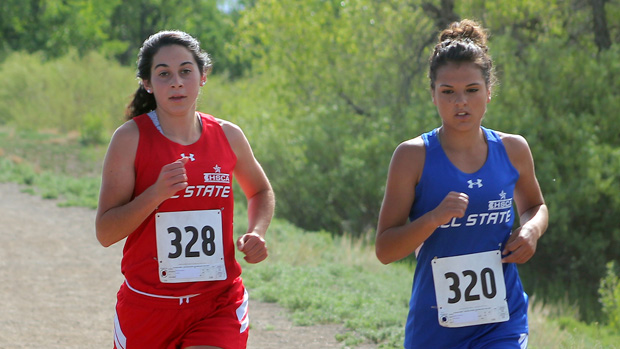 Yes, it can be a little disconcerting to see Miriam Roberts in red and Natalie Anderson in blue, but at least the pair finished in familiar territory. Photos by Eric Flores.
Special to Colorado Track XC by ERIC R. FLORES
Courier Sports Editor
ALAMOSA—The inaugural Colorado High School Coaches Association (CHSCA) All-State Cross Country race was a success on Wednesday as the brilliant San Luis Valley weather led to some great racing conditions for some the state’s top runners.
Originally, 12 girls and 14 boys were scheduled to be in the race but as the race began, only nine boys and ten girls competed the 5,000-meter course. The CHSCA invited the top ten boys and girls from the state meet in each division.
With Adams State being one of the best distance running powerhouses in the entire United States and hosting the All-State games, it seemed fitting that the first All-State race be held on some of the most used trails in the city. The race begin in Cole Park, which all Adams State and Alamosa High School runners know as their training ground, and then continued on the dikes that surround the Rio Grande river and Cole Park. These trails are used daily by professional, collegiate, high school and even recreational runners.
Several of the runner noted that they ran ‘a couple of times’ since track season ended on May 17 and, even though there were not personal records set, there was laughter, companionship, and running.
In the girls’ race, Miriam Roberts of Lyons, Natalie Anderson of Hotchkiss and Jessica Kleven of Pueblo South took the lead together. The three kept with each other for more than two miles before Roberts took a slight lead and won the race in 20:56.6. Anderson was 11 seconds back in 21:08.5 while Kleven was third in 21:26.7.
There were two San Luis Valley athletes competing in the girls’ race, Del Norte’s Jordyn Neely and Sargent’s Grace Stults. Neely finished the race in fourth place by posting a time of 22:42.7 while Stults finished sixth in 24:09.3. Kiowa’s Beth Campbell was sandwiched in between in fifth place in 23:01.3.
Madison Manning of Gunnison (24:18.2) finished seventh, Jordyn Arcuri of Vanguard (25:04.5) finished eighth, Hannah Carey of Rocky Ford (29:16.2) and Shaylin White of Rocky Ford (29:16.2) rounded out the girls’ runners.
With Robert’s being the only runner in the top six from the Red Team, the Blue Team dominated the scoring by scoring 20 points. The Red Team finished with 37 points.
“It was fun just to be able to run again with these runners,” said Roberts of racing with Anderson and Kleven after her race. “It’s a really good course to run on.”

After a 5:17 mile on the boys’ side, D’Evelyn’s Carter Prescott decided to take off  and take a lead. He never looked back as he won the race in 16:36.2. Lamar’s Josh Davis finished in second place eight second back in 16:44.2.
The two runners were more than a minute faster than the next finisher as Grand Junction’s Greg Eccher finished in third in 17:54.8. Rocky Ford’s Rhett Hinkle finished in fourth in 18:15.8 while Mancos’ Justin Burton rounded out the top five in 18:32.7.
Vanguard’s Jacob Evangelista (18:42.2), Olathe’s Freddie Ramirez (19:02.3), Salida’s Avery Martinez (19:31.5) and Del Norte’s John Haefeli (19.37.4) rounded out the runners.
The Red Team won the team race as they scored 14 points and the Blue Team scored 23 points.
“It was a good showing for the first race,” said CHSCA All-State Games Director Amy Estes. “We hope it will continue to grow and we have a better showing next year.”
Adams State hosted a kids’ clinic before the race with a 1400-meter run around Cole Park. The future of Lamar’s cross country program went on display as three Davis brothers finished the race.