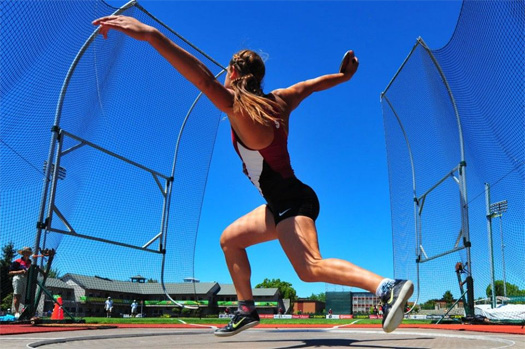 Valarie Allman winds up on a throw en route to winning the US Junior Women's title in the discus. Tracktown Photo.

Highlighting the weekend for Colorado were Haley Showalter, who won the hammer throw at 188-8, Bailey Roth, who won the 3000 meter steeplechase in 9:03.92, holding off a threat from Bryce Miller of UMKC for the win, and Valarie Allman, who won the discus at 188-6.

Also claiming World Juniors qualifying slots, however, were Elise Cranny with a second in the 1500 (4:17.40) and Dior Hall with a second in the 100 hurdles. Hall's 13.00 (+2.0) 100H time also moves her to #2 on the US AT high school list for the event. While most of the competitors seemed to struggle slightly with the trailing wind, Hall was able to make to most of it and improve her PR time from the Colorado state meet in May.

Just missing a qualifying position was Chyna Ries with a wind-legal PR long jump of 20-10.75. Amazingly, that jump missed the qualifying mark by one-half inch.

Other Colorado competitors on the weekend included Collin Scheer, fifth in the high jump at 6-8.75, Tabor Scholl, sixth in the 1500 at 4:34.10, and Kevin McClanahan, Carly Lester, Josephine Natrasevschi, and Marcus Harris--each of whom was eliminated in preliminary rounds.