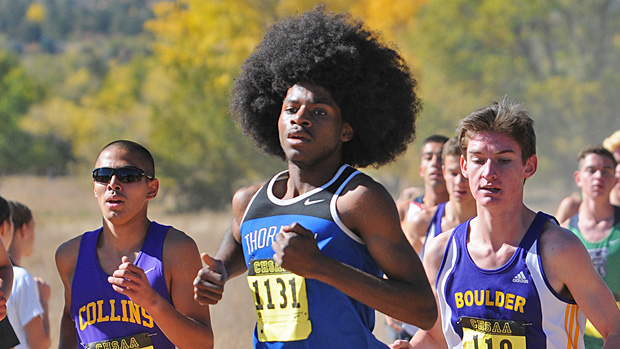 It's now the turn of the 4A and 5A races at the Cheyenne Mountain Stampede to come into preview. As mentioned in the 2A/3A preview piece, the varsity races for 4A and 5A do not begin until 4:30 PM. The latest weather forecasts are at least suggestive of a cooperative afternoon and evening--though we're not yet entirely out of the woods--which should be mostly hopeful news all around.

The 4A division at the Stampede, of course, remains the largest division and is split into invitational and non-invitational races. There's a little guesswork involved, being the first meet of the season and all, but meet management endeavors to identify the top teams and place them together into the invitational races.

And so it is that several of the leading 4A teams show up together in the invitational races late in the day. Boys teams pitted against one another include Battle Mountain, Erie, Durango, Cheyenne Mountain, Pueblo West, Palmer Ridge, Niwot, and several more--to a total of 16 teams. There should be some very nice early-season jockeying for position going on among these teams. And, add in Michael Duran for Pueblo Centennial with a few others likely to compete--such as Eric Hamer, Zack Retzlaff, Ian Meek, Maximilliano Martinez, and a few more--and you have a very interesting individual race. I don't have any inside word on this, but my hunch is that--like last year--we won't see William Mayhew in this race. If we do see him, count it as a bonus.*

In any case, look for a very entertaining final race of the day.

The 4A girls invitational is very nearly as enticing, though it takes place considerably earlier and possibly under much warmer temperatures. There we expect to see top teams like Battle Mountain, Durango, Discovery Canyon, Summit, Palmer Ridge, Niwot, and Mountain View. Individuals should include Lauren Offerman, Christa Boettiger, Riley Cooney, Aubrey and Katie Till, McKenna Ramsay, Ruthie Boyd, Beth DeLaurell, Shannon Maloney, the return of Greta Van Calcar, and several more. There will be much time spent over the meaning of the results of this race.

What we can probably count on from the 4A non-invitational races is a couple of teams to step forward and make a statement that they are teams to be reckoned with this season. It always fun to witness the unveiling of such teams.

The 5A fields are on the side of small this year. With a lot of teams dropping that had indicated some early interest, the girls field is down now to 13 teams. Although these things can be tricky to judge so early in the season, Grandview may be the top girls team toeing the line. Some of the individuals to keep a closer eye on, however, should include Gabrielle Roth, Olivia Babeu, Kayli Tabares (Doherty freshman), Julia Vitella, Brynell Yount, Emma Gee, and Cami Kennedy.

For 5A boys, the field expands slightly to 14 teams, with schools like Thornton, Smoky Hill, Pomona, and Heritage projected to snare most of the top spots in the team tally. Individuals likely to be spotted toward the front of the field include Joshua Joseph, Blake Yount, Marcelo Laguera, Adam Egger, and Dylan Day.

So, we'll wait and see what the running of the races and any new course decisions made tell us. But, we can also try very hard not to get the enjoyment of the racing lost somewhere in the middle of that.

* - Late note: William Mayhew is on the list of entries for this meet. That will only add to the fun.