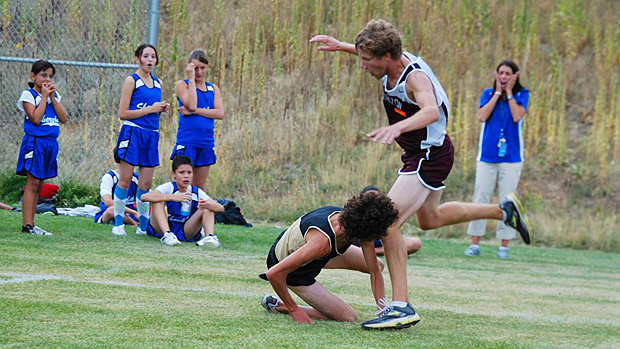 This moment in Colorado cross country history brought to you by the Golddigger Dash. Contributed photo.

You're probably wondering about the cover photo for this article. You should be. It showed up on Ben Hershelman's Facebook page this summer labeled as the "Greatest Cross Country Photo Ever," and I instantly knew I had to learn more of the story.

The image comes from the 2010 edition of the Clear Creek Golddigger Dash. Heading onto the field, Horizon's Adam Hartman and Jefferson Academy's Daniel Mahoney were running shoulder to shoulder. A near 180-degree turn heading into the final 100 meters saw Mahoney and Hartman get their legs crossed. Of course, this is one of the toughest courses in the state, so there wasn't much starch left in the legs of either. The photo you see above is what happened in the moment after their legs became entangled. Offhand, it would appear Mahoney got the worst of the exchange. As you might have suspected, Hartman went on for the win--by a margin of three seconds. Mahoney probably never messed with Hartman again.

It's entirely possible some of the middle schoolers you see in the instant of being permanently scarred (though one of the girls seems wholly unimpressed) in the photo could be running in this Tuesday's race.

All of that to introduce this year's version of the Golddigger Dash as our first meet out of the gate for this week. We don't expect pile-ups with 100 meters to go, but you never know. Teams that go to this meet generally stay kind of hush-hush about it, and I struggle to get results from this meet, so I'm hoping a little extra meet publicity here goes a long way toward receiving results from the meet.

Also on Tuesday is the Florence Husky Invitational at Pathfinder Park just west of Florence. This meet has something of a history of being an oven, and that little bit of history could repeat itself on Tuesday, but the alternative of thunderstorms could prove to be worse. We'll hope that Florence Husky meet enjoys merely an afternoon respite from the heat in the form of clouds disinclined toward dropping lightning bolts.

After Tuesday, you must wait until Thursday for high school cross country action to resume across the state.

The alternative meets on Thursday are the Standley Lake Gator Invitational at Stony Creek Golf Course in Arvada and the Air Academy Kadet Invitational at Air Academy High School. The Standley Lake meet is a new venue for this year, and we wish them well with that. Specifically, we'll hope that they get the race in before the wet weather, since wet weather and golf courses only rarely make for a happy ending. Air Academy's course, on the other hand, is essentially weather-proof, even if they have abandoned the former circuit for a kindler, gentler type of cross country course around the school. Thus, the images of Allie McLaughlin pounding her way up the infamous Air Academy hill are doomed to fade slowly into the recesses of the memories of those of us who were there to see it.

If you're heading for Air Academy, be prepared for the annual e-mail blast from the meet director about conditions for getting onto the Air Force Academy grounds. Expect that they'll want to see your ID and take a looksie into your trunk. Pack accordingly, please.

Friday, of course, is Liberty Bell--plus a few other meets. If you haven't checked the weather forecast for Friday, you should. The good news is that the latest forecast model calls for most precipitation to arrive in the morning. The not-as-good news is that there's some possibility that the precipitation comes in the form of very wet snow. Mind you, we're not worried about the course. The course is asphalt and as-close-to-asphalt trail as you could ever hope to find. And it's all level. It's the spectators who may find themselves a little on the side of chilly. But, standing as close to humanity as you need to at Liberty Bell, you can probably siphon off a little body heat from a few people next to you without anyone taking notice.

All that (except the crush of humanity part), of course, will likely also be true at Fort Morgan's Riverside Park, the Mountain Range meet at Adams County Fairgrounds, and most especially at Platte Canyon's Rosalie Property course. If you are headed toward Platte Canyon, you should have already known you were in for the full cross country experience, but if there's a threat of snow in the Denver metro area, you can imagine what the possibilities are like at the Rosalie Property. We'll put the Platte Canyon meet on the endangered species list for now.

Grand Junction also runs on Saturday, but Grand Junction operates on an entirely different weather forecast than the Front Range. We don't expect rain, snow, or much of anything except grass, sidewalks, and level at Canyon View Park on Friday.

As is typically the case, Saturday meets get a little thinned out on Liberty Bell Weekend. You can find the Pueblo Central meet at the old state meet course in Pueblo, the Gunnison meet (which combines with Western State's meet for a preview of the RMAC conference course in November), the Eagle Valley meet on the Gypsum Creek Golf Course, and the Southwest XC Challenge. The last I heard, they were still making decisions about a venue for the Southwest XC Challenge. I'm guessing that decision has now been made, but word of whether it's Saul's Creek or a new location between Durango and Bayfield hasn't yet reached my laptop.

But, you did read that last paragraph correctly--there is only one cross country meet along the entire I-25 corridor on Saturday. I'm happy to be taking my team to Pueblo Central's meet, but I am a little bummed it conflicts with an ACT date.

Out-of-state travel for Colorado schools basically comes to a standstill this weekend. On the other hand, we can expect schools from New Mexico, Nebraska, and Wyoming at Liberty Bell. The Southwest XC Challenge figures to pick up a New Mexico school or two. And, Grand County, Utah, is headed for the Grand Junction meet.