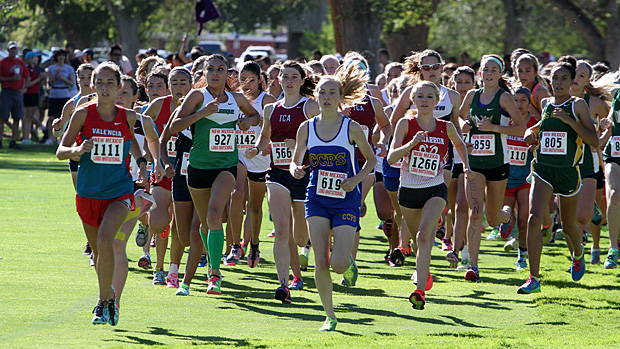 Most of New Mexico's top teams saw their first action at this weekend's UNM Lobo Inviational. Photo by Alan Versaw.

We are now officially waist-deep in cross country season. Each of the Southwest Region's five states went full-throttle into a loaded slate of action this past weekend. So, let the tour begin...

We noted Palo Verde as a team of interest last weekend, but PV didn't have nearly as strong of a performance this weekend, despite an individual title from Noah Landers at the Larry Burgess - Las Vegas Cross Country Invitational. More unsettling still for the Nevada programs is the fact that Pine View (Utah) came in and disposed of the competition. Centennial was the most competitive of the Nevada schools, but none presented a serious challenge to Pine View's domination of the boys side of the meet.

Palo Verde was, however, as strong this week--and maybe even a little stronger--on the girls side of things as they were last week. PV easily outraced all the other Nevada schools at the Las Vegas Cross Country Invitational and was about to keep visiting Pine View in second by a score of 31 to 59. Palo Verde had no runners under 20:00, but until we know more about the course and conditions, that fact in isolation doesn't tell us too much.

This past weekend was opening weekend for the Arizona schools.

In the Northwest Showdown (If you know a little Arizona geography, you might be thinking this meet was in the Prescott area, but it was actually in Tucson--I'm guessing Arthur Pack Park is in northwest Tucson), traditional power Ironwood Ridge got off to a nice start with a convincing win in the boys division. Vista Grande, Catalina Foothills, and Ironwood Ridge staged a very close battle for team supremacy in the girls race. The show was stolen, however, by Canyon del Oro senior Bridgette Doucet, who completed the 3 mile course in 17:42. A long commercial break ensued before second place arrived.

At the Peaks XC Invitational, Xavier College Prep demonstrated what we've suspected all along--the girls in blue can run at altitude, too. More precisely, they can dominate at altitude. The only adjustment here seems to be getting accustomed to logging times that exceed 20 minutes. We'll take a moment here to tip our figurative hats to the courage of Xavier to take on and conquer the altitude challenge. Lots of lower elevation programs wouldn't even think of it.

Another low altitude team, Greenway High School out of Phoenix, dominated the boys Ascent division of the Peaks XC Invitational. For these guys, the psychological adjustment required was one of running times in excess of 18 minutes. Again, I wish I knew more about the course, but my hunch is that there's more than altitude (though Flagstaff has plenty of that) involved in these times.

More importantly so far as regional order is concerned, however, is the domination of the Summit division by Page. Page's Jeffrey Miller took the win in 16:35, and all of Page's scoring five placed in the top 12, making for a very convincing win over neighboring (at least relatively so) Northern Arizona powers Chinle and Tuba City.

And, back in the heat in the Valley of the Sun (I don't believe the torrential rains arrived until after Saturday's racing), Corona del Sol took out such worthies as Mesa Mountain View and Highland in the boys division of the Chandler Invitational--and convincingly so, while Highland held sway in the girls division. Of note, Desert Vista was not in attendance at this meet. It should be noted that this was actually a class meet, where freshmen run against freshmen, sophomores against sophomores, and so on. The conclusion that Corona del Sol and Highland dominated the meet is arrived at by combining results from all divisions and scoring as a traditional meet.

Bear in mind that everything from Arizona is in very early stages. We'll continue to watch developments closely to identify the teams rising to the top of the pile in Arizona.

The UNM Lobo Invitational served as the official season opener for most of New Mexico's largest schools. But, the arrival of Colorado-based Mountain Vista meant a stern test for the New Mexico boys programs. Mountain Vista proved a more-than-worthy adversary, easily taking top honors in the boys race by placing their entire scoring five in the top 21 places--and this in a meet where 31 schools earned team scores. Rio Rancho made their case as the early top boys team in New Mexico, followed at a respectful distance by the familiar red singlets of Albuquerque Academy.

New Mexico more than held their own in the girls division, however. Running a roster studded with 8th and 9th graders, plus Molly Klein, Rio Rancho took the win, but with a serious challenge from a surprisingly good Albuquerque Academy team (evidently, we should infer nothing about AA's cross country potential from their girls track performance this spring). Also close enough to warrant some ongoing attention were La Cueva and Eldorado. Significantly, Los Alamos was pushed all the way back to sixth. My reading of these tea leaves is that New Mexico girls cross country is in the midst of taking a giant leap forward this fall.

Also in New Mexico, the Cibola boys ran roughshod over the Del Norte Invitational, but the City of Gold guys have a 3-4 gap to address.

The Centennial State hosted two meets of major regional importance over the weekend. The first was the Cherry Creek Invitational on Friday evening. Arapahoe's boys, reflecting some preseason promise, rolled Cherry Creek and Fort Collins for the team title. Fort Collins, however, has yet to show their full hand. Maybe this Friday...

The girls race at Cherry Creek probably held a little more intrigue. This one featured a match-up of Cherry Creek and Fort Collins. While both teams were short at least one key runner, Cherry Creek handled the challenge and turned Fort Collins aside, 33 to 52. Given that Cherry Creek was done one Jordyn Colter, we'll take that as an indicator that the Bruins hold the upper hand, at least for now. We may, however, get a chance to revise that assessment this weekend.

The St. Vrain Invitational was the big event in the state of Colorado this past weekend. And, with Holly Bent back in the roster, Monarch proved to be more than enough for the Pine Creek girls to handle. If Pine Creek finds/develops a #5, however, we may need to revisit this question. Both Monarch and Pine Creek are very good girls teams right now.

The boys title at St. Vrain went the direction of 4A Palmer Ridge, with five guys under 17:00, three of them sophomores. If Palmer Ridge isn't yet on your list of Region teams to be taken seriously, please pencil them in with all due haste. Palmer Ridge easily took down two very good teams in Boulder and Monarch.

Although not quite the same scale of meet at Cherry Creek or St. Vrain, the Centaurus Invitational proved to be something of a proving ground for Fairview. The Knights, both male or female, dominated the competition and have probably begun cultivating dreams of slaying larger dragons down the road.

At last, the Timpanogos boys took a breather. With both American Fork and Timpanogos running essentially second teams, Mountain View rose to the top of the Provo Bulldog Invitational. American Fork's girls weren't even at the meet, and that left a door wide open for Provo to take the win. Provo does not yet, however, rank among the top girls teams in Utah.

American Fork ran their boys earlier in the week at the Pre Region 4 gathering on Wednesday and left with a perfect score. If cross country was a score six affair, the Cavemen still would have left with a perfect score. Such is the measure of their domination. Herriman's Lucy Biles messed all that up on the girls side, but American Fork did still manage six of the top eight places and an easy team title. Lone Peak was second, and Herriman third, but both teams are struggling with pack time issues at the moment.

Davis routed everybody, boys and girls, at the much larger Utah State Aggie Invitational on Friday. In a meet with 21 scoring teams, Davis snared four of the top seven individual girls places. Ogden was a very distant second, with the first Tiger finishing on the heels of the fifth Dart. You get the picture. The Davis boys were only nearly as dominant, with Lehi taking the place of Ogden as a distant second, while the Ogden boys retired to third.

There you have it--a quick 20-minute tour of the highlights of the Southwest Region for the week gone by. This week, you can look forward to more top-tier cross country action across the region, highlighted by the Liberty Bell Invitational in Colorado on Friday afternoon.