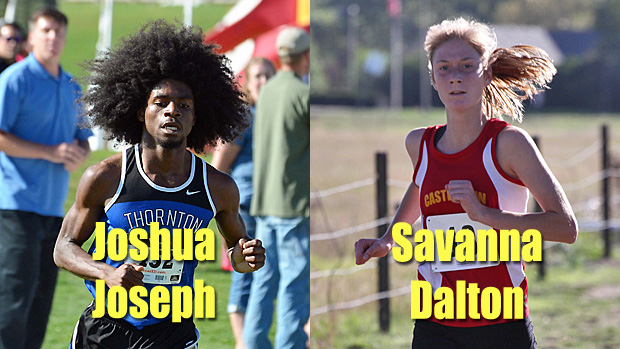 Joshua Joseph and Savanna Dalton both claimed big wins at their home invitationals this past weekend. Photos by Ron Eberhard, Alan Versaw.

We’re just past the half way mark of the season and have seen some impressive performances all over the state from athletes both new and familiar. This week, Colorado Track XC adds two new rising stars to the list of the athletes of the week.
Savanna Dalton won her home meet this weekend at the Castle View Sabercat Invitational. The junior from Castle View High school raced in some hot, difficult conditions and still finished in a smooth time of 19:31.1.
“I was really hoping that I would win this one, and I did,” Dalton said.  “I was also hoping to beat my PR but I wasn’t able to that day. But I realized our course really isn’t about time, it’s more about position.”
From the very beginning of the race, Dalton grabbed that top position and held onto it over the entire course. Dalton finished with a 23 second lead and no one else in sight. “I just got out really quickly at the start and then lead the whole race,” Dalton said. “I just kept my mind on my pace. I didn’t think about the thought of going too fast or too slow, I just kept going.”
Although she’s a junior, Dalton’s success is relatively new. Competing in the 5A division, Dalton finished 20th at last year’s state cross country championships and 10th in the 3200 at the track state championships. She’s always been a strong runner, but winning is somewhat of a new experience. “I’m kind of only getting used to winning and being up there at the top,” Dalton  confessed. “This season I’ve won three meets so far. I really like being at the top. It pushes me to still do better and it gives me motivation to keep going faster.”
Fast appears to be the theme of Dalton’s season this year. Two weeks ago, Dalton traveled out to California to race and posted a sweet three mile time. “The top seven on our team get to go out of state every year just to go down to sea level and race down there.  I ended up running an amazing time for three miles--a 17:56. It wasn’t a true 5K, but I was so happy when I got that time.”
It’s been a very happy season all around for Dalton so far with fast times and multiple victories. “My season is going really good, and I’m especially happy with where I’m at right now,” she said. “I think at this next meet I’ll break my PR and get the school record again... I’ve been doing really well so far, and I’m just staying confident with my times.”
To stay on track during these final few weeks of the season, Dalton knows what needs to be done. With hopes of more fast times and a higher placing at state for her and her team, Dalton is prepared for the challenges ahead. “I just keep my mind focused and keep pushing myself,” she affirmed, “I don’t get it in my head that I can’t go any faster, but I don’t get cocky. I just try to be my best and achieve what I want to every single race.”
On the boys side, Joshua Joseph also won his home meet last Friday. The senior from Thornton High School stole the show at the Thornton Invitational, cruising to the finish in a time of 15:47.8.
“We’ve run on that course a lot, and it’s also our Regionals course,” Joseph explained. “I was just focused on making multiple moves on the course to see what I’m going to do when Regionals comes around. At the beginning of the race, there was one kid with me for the first half, but then I used the downhill to break from the pack and then just cruised to the finish from there.”
Joseph completely dominated his competitors, finishing 45 seconds ahead of second place. It was a solo show from a very early stage of the face, and it was all up to Joseph on how fast he wanted to go that day.
“Going into the race, I found it easier to keep up the pace because of how familiar I was with the course,” he said. “I didn’t have much competition and the conditions were really hot.  I think I could’ve cut more time off if I’d had someone with me.”
Nevertheless it was an impressive victory for Joseph and a nice performance at his home invitational. “It felt so good,” Joseph admitted, “It was the first time getting a win on my home course. It was really cool to go out at my home meet and get a victory.”
Individual success like this is also fairly new to Joseph.  He had somewhat of a breakthrough season last year as a junior finishing fourth at the cross country championships and then competing for the first time at the track championships.  Now a senior competing in his final races, Joseph is thrilled at his current state of fitness.  “It’s surreal looking back on all of the races I’ve run and seeing how far I’ve come,” he said.  “I’m very excited about how my senior year is going and I’m just waiting to see how I can perform at state.”
With his eyes set on League, Regionals and possibly even a state title, Joseph knows what needs to be done to accomplish his goals. “I’m just going to keep doing the same thing as I’ve always been doing,” he said.  “I always listen to my coaches and run very strict to their programs.  I have a long ways to go if I want to cut the gap between me and Zach Alhamra but, it’s definitely a possibility.  I just need to trust in my program and continue doing everything I need to do.”
Congratulations to Colorado Track XC’s athletes of the week Savanna Dalton and Joshua Joseph.  We hope their stories of improvement and success serve as inspiration to all other rising stars!
Tweets by ColoradoTrackXC