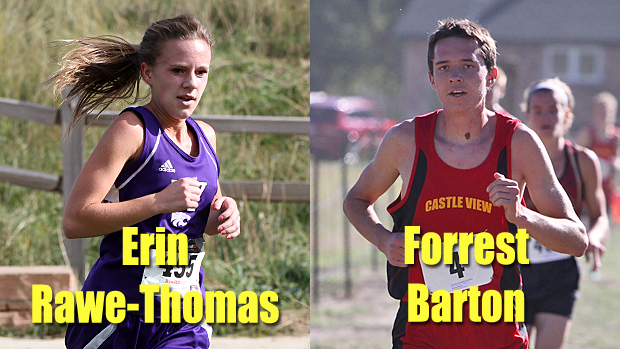 In a week full of nice league meet performances, Erin Rawe-Thomas and Forrest Barton took their performances to the next level. Photos by Alan Versaw.

For their impressive victories, Colorado Track XC’s honors two freshly-crowned league champions as the athletes of the week.
Erin Rawe-Thomas is your league champion from the Jefferson County 5A division.  The senior from Arvada West High School had an outstanding performance, coming back hard very late in the race to edge out a win in a time of 19:25.
“The hope going into it was to win it,” Thomas said. “I really wanted it because I’m a senior. When I was a freshman I was one of the last in the league so I wanted to redeem myself.”
Rawe-Thomas ran a very smart, tactical race that she and her coaches had rehearsed earlier in her training. “I’ve run that course so many times, so I knew that first mile I shouldn’t go out hard,” she said.  “I knew I should stay back and then push the second and third miles. The strategy was to not over do it too early.”
Rawe-Thomas paced out her own race, always making sure to stay comfortably within herself yet always sticking close to the top girl. By mile two, Columbine’s Noelle Cobb had established a 40-meter lead, yet it was not enough to withstand what Rawe-Thomas had planned next. “I’d picked out where 100 meters to the finish was and once I reached it I sprinted as hard as I could,” she said. “The sprint was crazy, I felt like I was floating. I crossed the finish line, turned around and saw Noelle just behind me and realized I’d won.  It felt really good--I was so happy to be able to walk away with that win.”
Completing the course in her fastest time to date and finishing only a second off of her PR, Thomas’ final league performance was one of the most impressive races of her high school career.  “This was definitely one of my best,” Thomas said. “It was one of my fastest times ever and it was a very hard course because of the hills. It was one of my best races I’ve ever run for sure- I was so happy to win.”
From being one of the runners in the back of the pack her freshman year to the top of the league her senior year, Rawe-Thomas is having a very nice, final season of her high school career. “I wasn’t completely expecting to win this,” Thomas admitted, “but for my senior year, I’m pretty proud of what I’ve done.”
Now in the final weeks of her cross country season, Thomas propels forward with a new league champion title to her name.  “I’m definitely going into the next race more confident now that I’m the league champion,” she said. “Last year going into Regionals, I was really nervous because I didn’t think I’d be able to compete and get a spot at state.  This year I’ll be more confident and that will help carry me through the races.”
With just two races left, Rawe-Thomas looks to finish better than she ever has before. “I really want to place in the top three for Regionals and hopefully in the top 20 at State.  If I could do that, that would be amazing.”
On the boys’ side, Colorado Track XC honors the new Continental League champion.
Forrest Barton won his league title in a mess of a rainy day. The senior from Castle View High School posted a nice win in a time of 16:30.
“I wanted to win and I planned on winning,” Barton reflected on his day. “I had been envisioning itn and it happened. It was a fun race with all the mud and rain, and pretty exciting.”
Barton had some company to run with on Thurdsday. Mountain Vista’s Paxton Smith proved to be the top competition yet did not have enough to keep Barton from achieving his goal.
“Paxton was with me until a little bit after the second mile,” Barton explained. “Then I picked it up and started kicking it in for the last three quarters of the mile.” Barton finished with a 13-second gap over second. “Last year I got third,” he continued. “It felt good to come out on top.”
Barton has accumulated a handful of wins this season and this league victory was undoubtedly another nice one to add to his list.  It’s proved to be quite the successful senior season for Barton.  “In middle school I used to win a lot,” he said.  “But coming into high school I got bumped back. This is the most wins I’ve had in a season, but with the training I’ve done it was expected.  I’ve been doing a lot of double runs and a lot more mileage.”
Improvement was what Barton was expecting this year and now he looks forward to bettering his 15th-place finish in the 5A state championships from last year. Barton is dedicated to finishing off his season strong and is taking the proper steps to ensure he can do his best in his last two races. “I’ve been getting a lot of sleep and just focusing on it mentally,” Barton said. “For Regionals I want to be in the top three and I want our team to make it to State. At State I’m hoping for a top-five finish.”
Both Thomas and Barton will be top contenders in their Regional competitions this week.  Colorado Track XC congratulates them on their outstanding league victories in hopes that their successes only continue in the next two races!
Tweets by ColoradoTrackXC