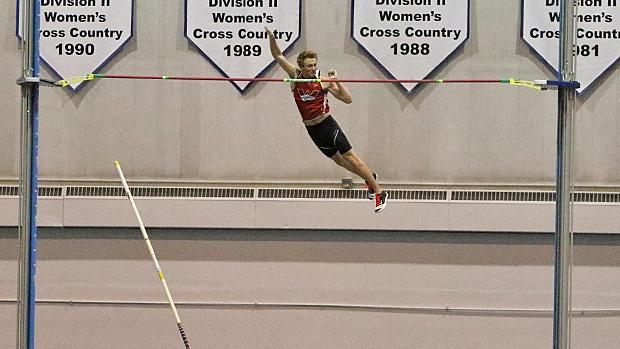 Most of Colorado's DII programs headed to Golden this weekend to take part in the CSM Twilight. Not, however, Western State and Adams State.

And Western State pole vaulter Noah Gorsky probably wakes up this morning delighted that his team made the trip to Colorado Springs.

On his first attempt at 5.11m last night, Zorsky cleared the bar with ease. The mark bears a double significance for Western's young pole vaulter out of Amarillo, Texas. 5.11m (16-9.25) is a new Western State school record and it is a auto-qualifying mark for DII nationals. It also appears to be a new personal best by about three inches for Zorsky.

There's magic in those runways...

After winning the competition after making a clearance at about 16-3, Zorsky opted to have the bar set at 5.11, the DII auto-qualifying mark for the indoor season. Zorsky wasted no time making the clearance, achieving success on his first attempt.

Action continues today at the Air Force Invitational. While Zorsky is not a Colorado native, countless Colorado high school alumni will be in action at today's meet.