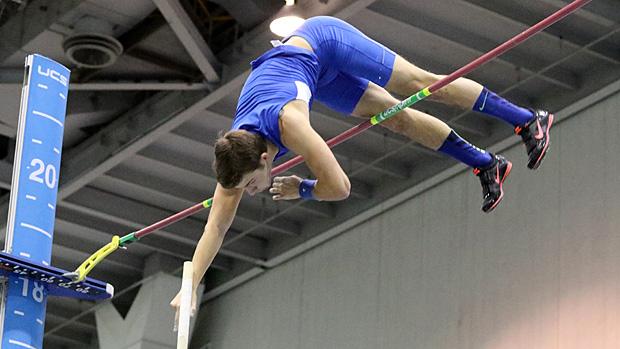 High schooler vaulters, take note--the Air Force Academy is a great place to bend a pole. Providing further evidence of that today was Joey Uhle, an Air Force senior who rewrote the Academy indoor record book with an 18-2.5 mark today.

For the first time this winter, we had an indoor meet that looked more like a track meet than a sharpening session. To be sure, there was plenty of sharpening still going on, but the competition had an edge to it we hadn't yet seen this season. Things get a little more real now for the next month as indoor nationals marks are at stake.

One of the day's best races pitted the University of Colorado's Ben Saarel and the Air Force Academy's Patrick Corona all the way down the finish straight of the mile. Saarel eventually took this one on turnover, 4:12.30 to 4:12.36. After you apply the altitude conversions on those, you have times of a little over 4:02 for both.

It wasn't difficult to find collegiate event winners out of Colorado high school alumni, as Colorado schools were nicely represented here. Starting with the men, Chaz Butler won the 60 in 6.75, but could not hold off Jai'Shawn Thompson's 21.50 in the 200. John Reynolds took the triple jump at an indoor PR mark of 49-2.25. And, Alex Kizirian took his customary place at the top of the weight throw pile with a mark of 69-0.

Turning our attention in the feminine direction, Ana Holland scorched to field to take the 60 in 7.52. Maddie Alm was the top collegian in the mile at 5:05.55, but the open runner ahead of her was also familiar to Colorado fans of track and field--that would be Alicia Nelson at 5:00.56. Nelson also won the 3000 in 10:04.98, but taking collegiate honors was Kaitlyn Benner in 10:05.23. Rajon O'Quinn won the high jump on misses at 5-8.75. Rachel Hinker (already noted in yesterday's article) dominated the long jump at 19-2.5, but today's triple jump had a much more dramatic ending. Cheyenne Hall bounded back from a series of sub-standard jumps to post the winner at 38-11 on her final jump.

The Cadet Field House is next busy with a collegiate meet on Friday, February 6.