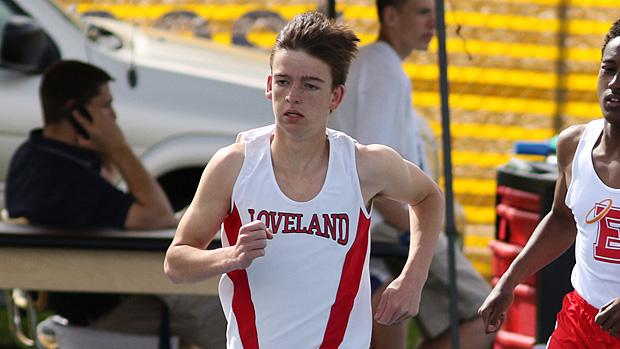 Marcus Quere has been turning a few heads this spring. He did a little more of the same at the LoboCat Roundup. Colorado Track XC file photo by Alan Versaw.

One season ago, Marcus Quere was a valuable member of Loveland's distance crew. He ran 1:59 in the 800 as a sophomore and was a strong leg for the Indians' 4x400.

But Quere was relatively unknown around the state. He had never been a contender in major races and had never run at the state track meet.

Well times, they are changing. If the Loveland junior hadn't already announced himself as a 5A challenger to place and perhaps more, his eye opening 4:22.90 in the 1600 meter run at the LoboCat Round Up put him on the map for good.

“In the mile, I knew Bryan Hird (Rocky Mountain) would be running and he's a smart racer," Quere said. “If I could stay with him, I could definitely run a new PR. I've been taking this week a little lighter and trying to get a new state qual mark. I told myself to stay smooth. Once we got through the third lap, I knew I could pull out a kick. I was hoping I could get first."

After sitting on Hird's shoulder at his home oval in Fort Collins for three laps, Quere started to unleash his 1:58.10 speed and made a move with 350 meters left that the Rocky Mountain star couldn't match.

But, Hird had a personal record of his own while coming in second place in 4:26.79, besting his 4:28.09 at the Runners Roost of Fort Collins meet a month ago. Peter Franklin of Mountain View placed third in 4:39.

Quere took advantage of optimal conditions with coolish temperatures and very little wind early on in the day, ideal for distance running. As the afternoon wore on, gusts of wind swirled in stretches and affected a few events to some extent.

The breezy weather played a role in the girls and boys 800. But, it wasn't enough to prevent some outstanding down-to-the-wire finishes in both.

First, Lauren Offerman of Mountain View, one of 4A's elite distance runners, after posting a 5:13 to win the 1600 comfortably over Silver Creek's Mikayla Gaffney (5:24), laced up for the two lapper. Offerman, as she's known to do, led early, but Loveland's Kristina Ritschard, an inner-city rival, made a decisive move down the back stretch and opened up a lead of a few meters. In the end, Offerman wouldn't be denied her second crown of the meet as she caught and nipped Ritschard 2:20.21 to 2:20.44.

Poudre freshman Luna Slater, already a force in 5A, ran a new personal best of 2:20.94 to place third in the 800 meter run. She came back soon after to win a closely contested 3200 showdown in 11:23, just clear of Rocky Mountain's Kacey Doner (11:26), Poudre's Alyssa Warling (11:27), and Loveland's Ashlyn Brent (11:36). The group of four traded off leads for seven laps. Slater sealed the victory thanks to an impressive last quarter.

In the boys 800, much like the girls, the race was undecided with 100 to go. Cheyenne East's Michael Downey and Silver Creek's Bronson Thomas-Garcia had several meters on Quere, and Downey appeared poised for the win. But, the Loveland junior found an extra burst and did just enough to catch both runners with a winning time of 2:00.65.

“Obviously it's cool being an underdog, but I love people saying, 'whose that Loveland kid and where did he come from?'" Quere said of making his presence felt in 5A.

“Hopefully I can keep moving up in the rankings. I just want to run good times, but it is fun surprising people."

Nathan Gish, on the other hand, came into the season as a known quantity. The Poudre senior, a standout sprinter for the Impalas with personal bests of 11.00 and 21.86 last season, is still excelling in those disciplines, but he's added another skill to his repertoire.

“This is my first year hurdling," Gish said. “I hurdled in middle school, but my coaches just thought I would be too accident prone, because I always got hurt in football. But they let me do it this year. I like it a lot."

There's a lot to like when you are capable of running 15.05 in the 110 hurdles, a new PR at the LoboCat Roundup and a first place showing over Mountain View super sophomore Nolan Kembel (15.23).

Rocky Mountain's Max McDonald, the defending 5A champion in both throwing events, won the double at LoboCat while going 50-11 in shot put and 151-03 in discus.

As far as team scores, the Mountain Lions of Mountain View showed off their incredible depth while scoring major points in nearly every event with standout performances by Logan Stewart in the long jump (22-3.5) and Nolan Kembel with a pair of second places in the hurdles as he added a 40.29 in the 300s. Add in a winning 4x200 with a time of 1:31.01, tying their season best, and Mountain View racked up 125 points. Rocky Mountain finished as runner-up with 111.5.

Fossil Ridge won the girls team battle with 118 points. Poudre (98) and Mountain View (95.5) were close behind.