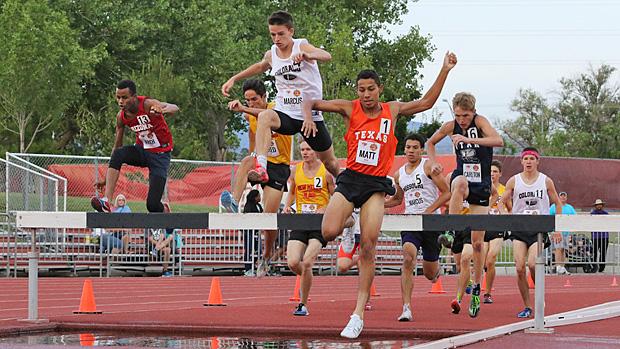 Loveland junior Marcus Quere (center) bided his time on the steeple early, but took things over in a convincing way late in the race. Photo by Alan Versaw.

As the single-effort events got underway, it became quickly apparent that Colorado had sent a team to Albuquerque that meant to make some noise.

Colorado sat out the boys hammer throw with no entries, but Colorado's lone entry in the girls hammer throw posted a monster win. Haley Showalter's throw of 191-0 checks in as the second-best mark of her career and a 45-foot margin of victory over second place. 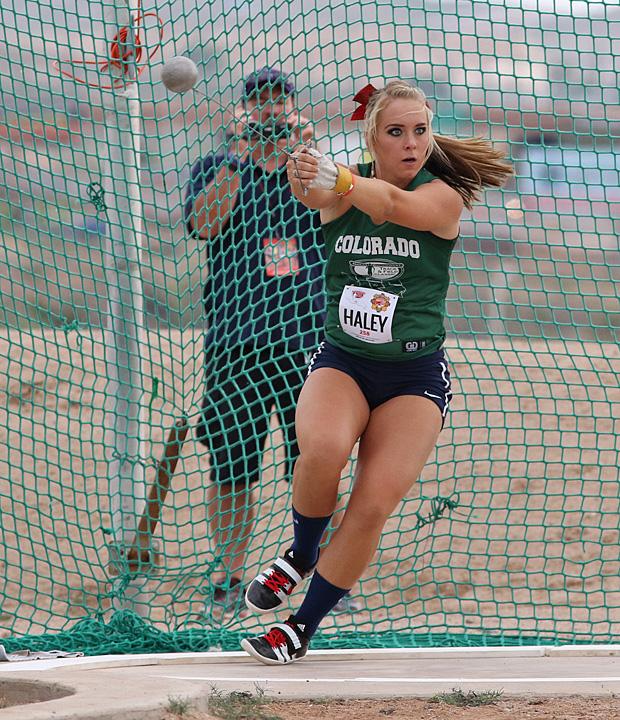 Showalter returns to the Great Southwest rings on Saturday with hopes of more big efforts in the shot put and discus.

Evening events began with the 2000 meter steeplechase. Colorado had a lot of talent entered into the races, but it was almost entirely untried talent.

Scholl hung with the leaders from New Mexico for better than two laps before turning a tight race into a rout over the final two laps. Scholl's superior strength allowed her to pull away from the field and win by an 11-second margin over Carisma Lovato, last year's defending champion.

Taking a page straight out of Scholl's book, Quere ran a nearly identical strategy. Once having measured the field, Quere made a move for the front of the pack that would go unanswered by the rest of the field until two competitors made a too-late kind of surge on the final lap.

By the time Carlton Baird and Alex Heffelfinger took out after Quere, Quere was no longer within range and posted the winning time of 6:23.87.

Ben Butler, adding a new race experience to his resume as well, finished fourth, just a hair under 6:30.

Relays ran deep into the evening, but Colorado got a first and a third out of the girls and boys 4x800s, respectively. A smattering of points were added by the shuttle hurdle relays and the boys 4x200.

Colorado's top finish in the multi events competitions was logged by Kyle Rex. With a solid second day of competition that included a winning 13-10.5 pole vault, Rex climbed several places to end up fifth in the final decathlon tally.