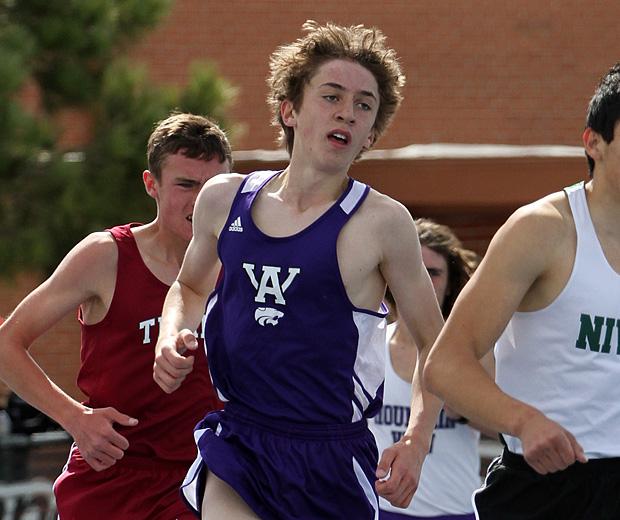 Colin Berndt takes his state-leading freshman 1600 time to North Carolina to test it out against other states. Photo by Eric Versaw.

At this point, it's a short, but intriguing, list of Colorado athletes pointed toward New Balance Nationals Outdoor.

Perhaps one of the more compelling stories here is that of Carly Lester. A hamstring injury brought her state-sanctioned season up short. Lester, however, is now healthy enough to be entered in the 100 and 400 hurdles at NBNO. It should be very interesting to follow how this one goes.

For a sneak preview, head to the Landsharks meet on Monument on Saturday where Lester is entered as well, presumably as something of a tune-up under meet conditions.

Battle Mountain's Sofia Calabrese makes the trip to North Carolina to compete in the high jump. Evidently, there's some unfinished business in her season as well.

While on the topic of local previews, note that we're expecting to see Andrea Willis at both the Landsharks meet this weekend and NBNO next weekend. Willis has been camping out in the 12-6 to 12-8 range for a while. Sooner or later, you would guess, she pops out on the other side.

Although William Mayhew and Blake Yount have garnered most of the Colorado attention related to (boys) 800 meters, Zack Retzlaff will be out in North Carolina trying to find his way under 1:53. He's earned his way into that field.

Logan Stewart has already found 23 feet in the long jump--perhaps there's still a little more to squeeze out of that this summer.

Madison Mooney takes on the "emerging elite" 800 and mile fields. I'll go on record as predicting she posts times that are easily better than several in the "championship" fields of those events. It would be surprising if she didn't.

And, one of Colorado's most intriguing entries is Arvada West freshman Colin Berndt in the freshman mile. In case you missed it, Berndt ran 4:34.50 for 1600 meters this spring at altitude. On the basis of that performance, he was Colorado's top-ranked freshman miler this spring, by nearly three seconds.

It's possible more Colorado entries will still be added, but that's what we have at this point. If I've managed to overlook an existing Colorado entry, please let me know and I will fix.