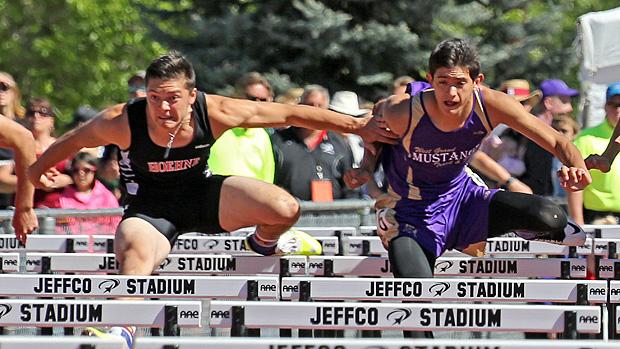 The way we currently seed hurdles helped lead to contact between Hoehne's Tyler Molter and West Grand's Ivan Mendoza at state this year. Can we design things better so this is less likely to happen? Photo by Jeff McCoy.

The idea behind this article is simple: If the way we do things creates problems, it's worth exploring other ways to do what we do.

Here is the problem: The way heats of the 100 and 110 hurdles are seeded currently frequently leads to contact between hurdlers in adjacent lanes, as shown in the cover photo for this article. Since hurdling is not a straight-up running event, competitors don't necessarily stay within the 42-inch-wide confines of their lanes as they make their way down the straight. In fact, they usually don't stay within those 42-inch wide confines.

This is perhaps more of a problem with boys than with girls, as boys have--on the whole--longer limbs and therefore reach farther into adjacent lanes as they pass over the hurdles. Nevertheless, it is still a problem with both genders.

And, the contact between hurdlers is frequently far from trivial. If arms happen to collide as hurdlers pass over a hurdle, bruises can easily be left, and both forward movement and timing impeded.

The cool thing here is that different seeding models could all but eliminate the unfortunate aspects of this situation.

The upside of this proposal is simply faster times. If hurdlers aren't whacking the guy (or gal) in the next lane, they are getting to the finish line faster. There would probably be a net result of slightly fewer collisions with the hurdles and falls. Both of those should be considered beneficial as well.

The downsides, I suppose, would be that hurdle races would not tend to progress in the familiar pyramid pattern we have grown accustomed to. I think I could get used to that.

I suppose that there might also be some fussing about midde-seed kind of hurdlers being assigned to outside lanes, but in hurdle events, that might actually prove beneficial--it means that obstacles come, potentially, from only one side and not two. Theoretically, it should be easier to focus on the task at hand in an outside lane than in an interior lane.

Okay, now it's your turn. Thoughts? I've started a thread on the forum for you, since MileSplit has made it difficult lately to connect forum threads with articles.

Direct Link to Forum Discussion on this Article