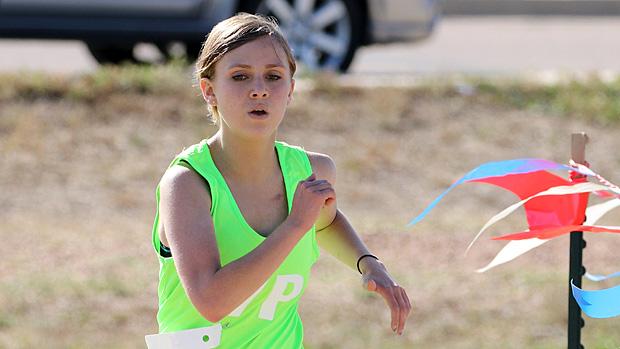 Aspen Heidekrueger navigates the final turn en route to a league title in her debut season. Photo by Alan Versaw.

With a few schools fielding B teams, and several others running with a key athlete or two absent from their rosters, the CSML meet could have taken a few strange turns. In the end, though, things were little disturbed from what expectations would otherwise have been.

The afternoon started, and ended, with a fairly stiff north wind. In between endpoints, however, they were able to get four races in, with much of the racing directly into the teeth of the wind and completely exposed to the wind.

The varsity boys ran very tactically off the start. With 4A and 5A running together (but scored separately), it took a while for the usual suspects to work their respective ways to the front. Ben Dingman, the presumptive favorite, was not in uniform for Rampart, leaving meet favorite status to Connor McCabe and Maximilliano Martinez.

Both McCabe and Martinez, however, seemed quite content to let things play out in front of them for a considerable distance. Martinez, evidently, was caught up in a Widefield team strategy of pack running, while McCabe was simply being patient.

By the second lap around the Fountain-Fort Carson High School circuit, though, McCabe had jumped into the lead and the late-to-move Martinez was left to work furiously on closing some ground.

Martinez was able to gradually close the gap and eventually caught McCabe just before the finish, clocking a 16:49 to McCabe's 16:50. Since, however, Martinez is 4A and McCabe is 5A, both walked away as league champions.

The Martinez-McCabe finish was followed by waves of Rampart yellow (you barely notice the blue in the Rampart uniforms in a race) and Widefield blue. Greg Selinger and Robert Richardson added top ten 5A finishes for Rampart, while Cole Munoz, Matthew Arbegast, Stephen Agenbroad, and Miles Mena all managed to wedge their way into the 4A top ten.

Worth noting is that four of the top 11 4A boys were freshmen, led by Matthew Roberds of Mesa Ridge. 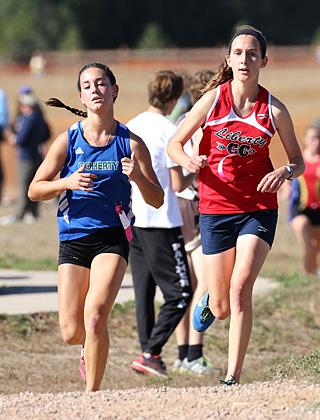 The varsity girls race did not have long to wait for its eventual winner to show up at the front of the pack. It only took a while for her to assume complete control of the race.

For nearly the entire first lap, it was a shoulder-to-shoulder affair between Liberty's Allison Mann and Doherty's Kayli Tabares. But, as the pair turned north into the wind on the second lap, it became clear that this was Mann's race to lose. And she didn't.

Mann would eventually finish at 19:49, 16 seconds ahead of Tabares.

The 4A winner would arrive at 20:44 in the person of Woodland Park junior Aspen Heidekrueger. Though a junior, this is Heidekrueger's first year of cross country, and she has certainly made the most of it with a league crown. Could a state meet qualification be close behind? It should take all of one week to answer that question.

Though the lead group of the 4A race-within-a-race was sprinkled with TCA crimson-and-navy, the neon green shirts of Woodland Park came across the finish line with greater frequency, and the Panthers easily secured the league title.

The 5A girls title was not nearly so easily decided. With Pine Creek running as close to a full roster as they've run in some time, Coronado had their hands full. The two teams started trading places with Athena Kuehn and Devon Kroeker in third and fourth, then Chloe Cassens and Madeline Moreland in fifth and sixth. And it continued that way right down the order.

Eventually, Lindsey Murray would close out the Coronado scoring in 18th. And that turned out to be just in time to hand the Cougars a two-point margin of victory over Pine Creek's Eagles. Rampart was a distant third.