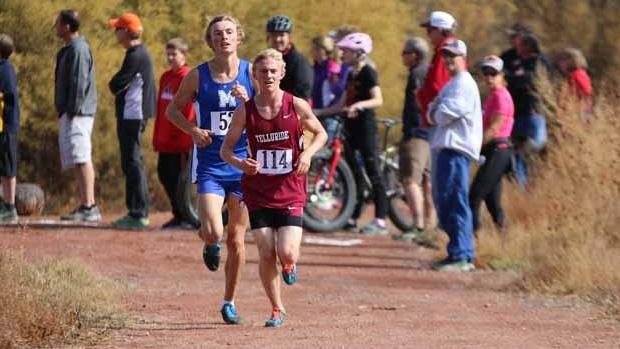 Jack Plantz leads with a little push from Ro Paschal early in Friday's 2A regional at Delta. Photo by Matt Scoggins.

The consensus of opinion, though not established face, has the top 2A teams at next week's state meet coming out of 2A Regions 1 and 4. Since we've not yet covered those regions, I wanted to take a moment here to offer a recap of what transpired.

Team titles went exactly as expected--to Lyons (boys) and Heritage Christian Academy (girls). Lyons' margin of victory was a mere six points over second-place HCA. In some circles, that could be take as cause for alarm (or celebration, as the case may be), but if you know the history of Lyons cross country, you're not going to get very worked up over those six points. Lyons, by tradition, takes something of a breather at regional week, putting more emphasis on league on state. If that seems a bit risky, it's been a while since Lyons was at serious risk of not advancing out of their region.

In any case, Paul Roberts took a leisurely win, while Joel Such held back some and ran with teammates.

Resurrection Christian and Highland advanced to state, but neither team was close to putting a scare into either Lyons or HCA.

If the Lyons boys eased off the gas a little, the HCA girls made up for it. This is a team on a mission, and the objective of that mission is a week away.

If Rebekah and Rachel Rairdon in first and second is getting a little ho-hum by now, Leeann Wagner in fourth is not. That is the kind of formula that can close the door on a lot of hope if they can put it together in similar fashion at state. Times of 19:57, 19:58, and 20:46 on a sloppy course suggest there is reason to be concerned about that. 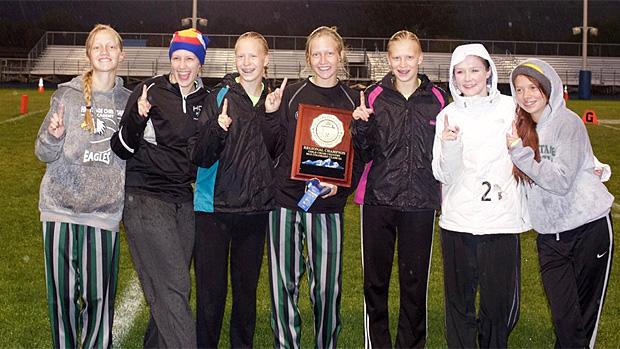 Whether they were laying back a little or not, Lyons' 26 points to the seven laid down by Heritage Christian underscores just how far HCA has come in the past year. Last year, Lyons won this region.

Maybe, possibly, it could be that Mancos has been purposely laying low all season. Or, maybe the monster was just sleeping in late.

Either way, you could make the case rather easily that the Mancos boys had their best effort of the season to date in Delta. After spotting the win to Telluride's Jack Plantz, Mancos brought Ro Paschal in in second, Simon Kearns in eighth, and Nic Archuleta in 11th. For Archuleta, that's a bright spot on the season and the 17:14 time earned could be indicative that prosperity has returned.

It wasn't a resounding win, but it was five points better than Ouray and seven better than Telluride. The Blue Jays will need a bigger effort still next week at state, but this is the best sign yet that that better effort could be coming.

Only two girls teams qualified out of the region on account of only six complete teams finishing the race. And those two teams are as familiar as things get on the Western Slope--Telluride and Hotchkiss. In that order.

Telluride's eight points dominated the region. In fact, so dominant were the Miners they could have won the region scoring only runners three through five. But, Telluride was happy to include the 1-2 finish of Soleil Gaylord and Maya Ordonez in their scoring total. Gaylord's winner took her all of 18:50, which sets up as a new PR on her athlete profile page.

Soroco freshman Chloe Veilleux, whose been having a very nice latter half of the season, ran third in 19:38.