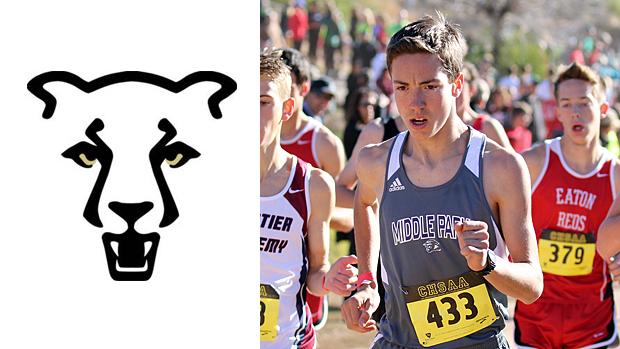 Mark Simmons had a dream come true with a podium finish at state cross country. Photo by Alan Versaw.

Start by telling us a little about the decision for UCCS. What do you like about the school and about the program?
I like that the school is a larger college, but not too large. My older brother, Steve, is on the team down there and he gave me a campus tour, and I absolutely love the campus. My brother walked onto the team with a time of 17:55. and my junior year I ran 17:17 so I knew I could run on the team time wise. It was just a matter of getting the coach to like me. While we were moving my older brother into his apartment, I had a meeting with Coach Mark Misch. During this meeting, I felt very relaxed. I felt as if he was the coach for me. The team also is a very relaxed group of guys, I have met a few of them, and I feel that with their support I can take my running to the next level.
What is your planned major at UCCS?
I would like to double major in Biology and Chemistry, as well as have a minor in education. My favorite science teacher, Mr. Crane, took this route and he is the smartest person I know. Therefore by majoring in the sciences and minoring in education, instead of vice versa, I hope I can become a science teacher with much more knowledge than one that just took the science education route.
I think it's fair to say you had an enormous breakout season this fall. What did you do differently that led to the kind of step forward that you enjoyed?
This year was a very large breakthrough season for me, although I started to improve to a faster level last year. This year we had Crossfit sessions over the summer, many more summer practices, as well as I went to a cross country camp. This cross country camp is one I would highly recommend to anyone who wishes to perform better. It was the High Altitude Cross Country/ Distance camp at Adam's State University in Alamosa, Colorado. This camp wasn't as high altitude for me, as I train at 8,800 feet, but I benefitted very much from it. The final thing that helped my senior year of running go from good to great was that I had a running partner who pushed me to my limit and then even more. Freshman Tyler Scholl was my running partner and he and I have become very good friends as well as we pushed each other to our limits. This amount of pushing got both of us down below 16:30, my time of 16:28 and his time of 16:25. Without each other's competition, neither of us would have gotten to be as fast as we are now.
Is the cross country season done for you know or is there some post-season racing still to be done?
I believe that my high school coach and friend, Scotty Hicks, has some indoor track races planned for me when I do not have Nordic ski races. Out of the three freshmen Coach Hicks had run for him my freshman year, I am the only runner that stayed with him all four years. This has allowed Coach Hicks and me to form a special bond that no one else on the team has. Plus my freshman year I had a PR of 21:15.39. But, anyways, I believe that my Coach has some indoor races planned for me and Tyler this winter.
You've dabbled in a lot of track and field events over your high school years. Will this spring be more focused on distance, or do you figure you'll continue some of the events like pole vault and triple jump as well?
This track season will be focused more on running. I always competed in those competitions for fun, but as it is my senior year and I have committed to UCCS, my track coach is going to have me focus on running events. She wants me to improve my mile by a bunch and Tyler will push me to do that. She also is expecting me to go to state in at least one running event. Thus, she is going to have me focus on running events.
Can you identify for us a favorite moment of your high school career to date?
If you asked me that question last year I would have told you when I qualified for the state race for the first time. However, that answer has completely changed. This year I had many moments that I enjoyed very much. For example when I won my first race or beat Tyler for the first time. However, my favorite moment this year was when I finished the state race this year. I finished and they put me in the top 10 corral. I had no idea why they put me in the corral and, to make matters worse, I tried to go get water and they wouldn't let me leave. Once I found out that I was in the top 10 corral, my emotions were a mess. I was excited, yet blown away. When they called me up to stand on the podium and receive my medal it was like a dream come true. My goal since my freshman year was to podium in a race that really counted. The fact that I podiumed at state my senior year was a great way to end my high school Cross Country career. Without the constant help and support from my parents, my coach, and my teammates I would never be where I am today.