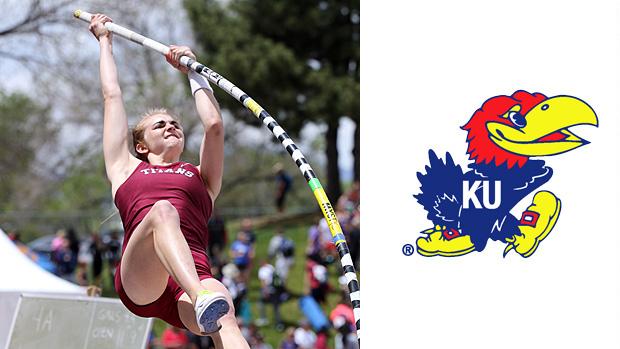 Andrea Willis has won state titles the last two years in 3A and 4A. The University of Kansas took notice and signed the promising pole vaulter. Photo by Alan Versaw.

Pole Vault: 12-11.5
************
If you're a good pole vaulter, you're going to have plenty of college options. What made the decision for the University of Kansas for you?
Kansas was one of my top choices going into my recruiting visits because they had a lot of majors that I am interested in, and they have been known to have one of the best pole vaulting programs in the country with one of the best coaches in the country. Kansas is also not that far from home, and I felt good about my visit. I felt that Kansas could give me the best opportunities to be successful both academically and athletically.
What do you plan to study at KU?
I'm not sure yet on a specific major, but I plan to study something in the sports medicine field.
Like a lot of other pole vaulters, you have a background in gymnastics. When did the transition from gymnastics to pole vaulting happen for you?
When I started pole vaulting my sophomore year, I was still competing gymnastics full time. By the end of that year I was progressing really well and I was really thankful for that. I stopped gymnastics November of my junior year to focus on pole vault, so the transition occurred over about a year.
What has been the most difficult part of pole vaulting to master for you?
I definitely have not mastered the pole vault, but so far I think the hardest part about pole vaulting would probably be running with a pole, swinging fast enough to be in the right position at the right time, and the top end. Pole vaulting is definitely a lot harder than I thought.
There have been a lot of highlights in your high school career already. Is there any one that stands out above the others?
I would say my PR clearance of 3.95m [12-11.5] stands out a lot. I had tried to clear that bar, or close to it, about 10 times during the 2014-2015 season. It was something I worked really hard to accomplish, and being able to clear basically 13' was really rewarding.
What are one or two of the goals that push you forward each time you pick up a pole to practice?
Missing a higher bar in a competition always makes me want to work hard in practice, fix the mistakes, and eventually be able to clear the next bar. Getting a PR is so rewarding and it shows that your hard work has paid off. It just makes me work so much harder to reach my goals.