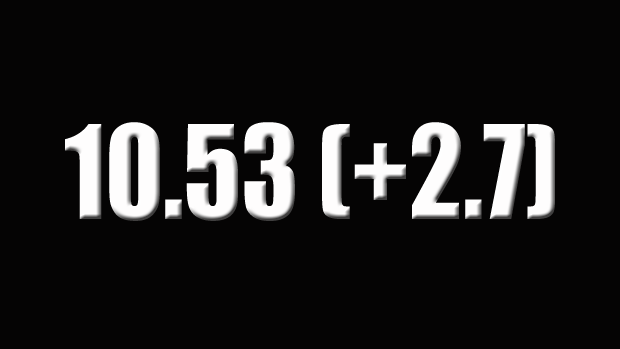 The associated wind reading would be the question here.

As we go through a series of articles pointing a finger toward potential updates to state records (whether classification records or state meet records) this season, it appears that there's at least one question worth asking retroactively about a record already on the boards.

If you go the to 4A Classification Records or State Meet Records (listed on page 32 of the current Track and Field Bulletin), we find that the boys 100 meter dash record is listed as 10.53 by Gregg Trigg of Fountain-Fort Carson High School, dating back to the year 2000.

No wind reading has been associated with the mark in the official listing of records, but I was recently able to locate the 2000 state meet results using the Way Back Machine (web.archive.org) to crawl back through old versions of the CHSAA web site.

I've posted those 2000 4A/5A state meet results on Colorado Track XC so that they are more generally accessible.

And, it turns out there is a wind reading associated with Trigg's mark, but the news is not favorable. That mark is listed with a wind reading of +2.7.

I cannot speak to what the CHSAA standard for acceptance of records was in 2000, but I can speak to the standard for records these days. Record marks for the 100 meter dash must be FAT and wind legal.

FAT isn't the issue with Trigg's record. Wind legal is.

Clearly, wind readings were in widespread use (though not necessarily at the high school level) by the year 2000. And, +2.0 was regarded even then as the maximum allowable wind for a record. Any number of theories could be advanced as to how Trigg's mark became accepted as the record even though it was accompanied by a non-legal supporting wind. At this point, I don't see any point in assuming any one theory is better than another. Most of us have no clue what the discussions were some 16 years ago, but perhaps someone reading this article has some recollection of the discussion that would have led to the acceptance of that mark as a record.

Nevertheless, it is one thing to take a mark as a record because wind gauges were not yet in widespread use and no wind gauge was present at the meet. It is quite another thing to look at an actual wind reading, see that it is non-legal, overlook that fact, and post the mark to the record board.

If we are serious about our records, this record should come under review now that we know what the wind reading on the mark was. I do not presume to determine the course that review should take, but the discussion should happen.

Unfortunately, with a record that has stood for nearly 16 years now, it isn't necessarily very easy to review all the intervening marks to determine what the 4A classificiation record should be.

We can also say what the fastest wind-legal 4A state meet 100 has been since Trigg's time. And the fastest non-wind-legal time, too, for that matter.

McKinney's time is especially relevant in that it is a better mark than Trigg's and, though still not wind legal, came with a closer-to-legal wind than Trigg's time. It's difficult to see an argument for retaining Trigg's record that doesn't simultaneously replace with McKinney's time.

But, by standards currently in use, it would appear that either the 1998 mark by Lowe or the 2008 mark by Morris should be regarded as the 4A State Meet Record for the boys 100 meter dash.

As best as I can determine from the meet results I do have access to, Joe Morris might also own the 4A classication record with a 10.53 from the Mullen Runners Roost in 2008.* The problem there is that the list of prequalifying marks (from a snapshot of the www.chsaa.org web site on May 1, 2008) lists Morris's prequalifying mark from the meet hosted by John Hancock--which should be the Mullen Runners Roost--as 10.96 (1.6). The results I have from that meet list the time as 10.53, but with no accompanying wind reading.

If Morris's mark for the 4A classification record is deemed not to stand, then Jeff Richmond's mark of 10.59 (0.0) would be the best verifiable 4A mark available. Northridge's Richmond ran that time at the 2011 Cherry Creek/Grandview Invitational.

Discussion on the topic, particularly discussion that comes with insights not brought out in this article, is welcome.

* - That would be according to what were likely results published in the Denver Post or Rocky Mountain News the day after the meet. At that time, the Mullen Runners Roost did not use Hy-Tek to publish results but instead hand wrote the results for each heat on sheets of paper, photocopied them, and taped them to the wall of the building north of the track. FAT was in use for the meet, however.