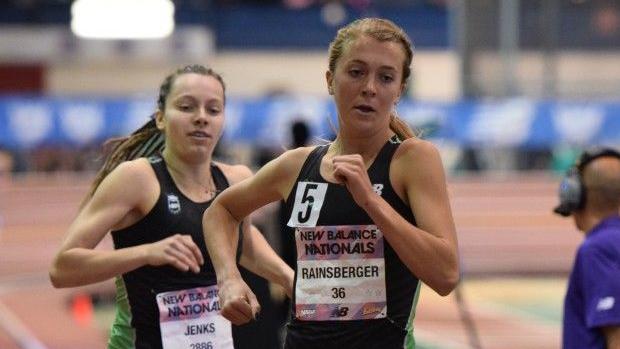 As the NBNI mile develops, Katie Rainsberger strengthens her position (and what an appropriate bib number for this race!). Photo by Kyle Brazeil.

The moment Katie Rainsberger crossed the finish line for the NBNI Mile in 4:36.61, four seconds slipped off the all-time Colorado record for a high school girls mile (for that matter, it also established a new NBNI meet record). In this race, four seconds is about 20 meters. That should help provide a better visual of how far ahead of the existing Colorado record Rainsberger ran.

And that was, without question, the highlight of Colorado's weekend at NBNI, but it was far from the only nice performance of the weekend.

Ryan Eddings would make it as far as semi-finals in the 60 meter dash, posted a pair of 6.98s along the way. The 7.05 Kent Harris ran in prelims did not advance to finals. A similar fate awaited Haley Rogers, who ran 7.90 in prelims.

Both Lauren Gale and Becca Schulte bowed out in prelims of the 200, but Colorado wrote a different story in the 400. Julia Hall and Schulte just missed finals with times of 55.36 and 55.75, but Gale's 54.86 got her into finals. Not satisfied simply to be there, Gale ran 54.35 to advance her standing to fifth in the finals of the 400.

Kiana Gomez ran 8.87 to get to miss semis by the most slender of options. Emily Sloan, however, advanced to semis and her 8.39 there very nearly--but not quite--got her to finals. Sloan ended up missing finals by all of one place.

Austin Campbell's 6-7 place him at 7th in the high jump. Taylor Alexander took three consecutive misses at the opening height of 3.53m to bow out of the pole vault without a mark. Kharon Hall went 45-6.25 in the triple jump to finish 19th.