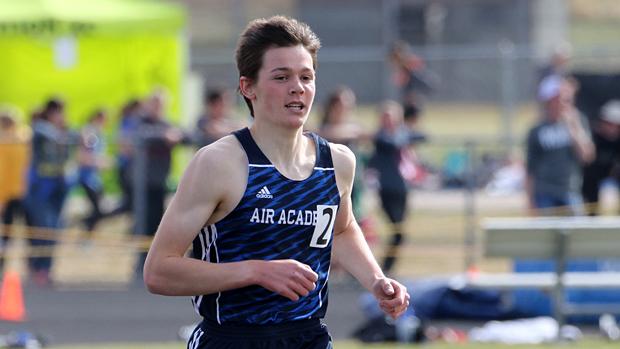 Matt McDonald's 4:21.08 1600 was one of the best Colorado performances of the weekend in Arcadia. Colroado Track XC file photo by Alan Versaw.

As Colorado delegations to Arcadia go, this one had nice numbers. In terms, however, of highly memorable finishes, this year's Arcadia meet probably didn't live up to expectations for the Colorado crowd.

But, there were a couple of gems even so.

Colorado did, however, show up in both Invitational 400s, with Caleb Ojennes logging a fourth at 47.28 and Becca Schulte a sixth at 55.80. Ojennes rolled four twos for his time in the Invitational 200, putting another sixth in the Colorado bag.

What most people from Colorado make the trip to California for, however, are the 3200s. So big are the boys 3200s that they go to three sections--Rated, Seeded, and Invitational--for these races.

Among the boys, Luc Hagen earned a 9:16.47 in the rated race. Invitational entries for Colorado included only Paul Roberts in 21st and 9:05.82.

In field events, Audra Koopman picked up a fifth in the long jump at 18-5.25.