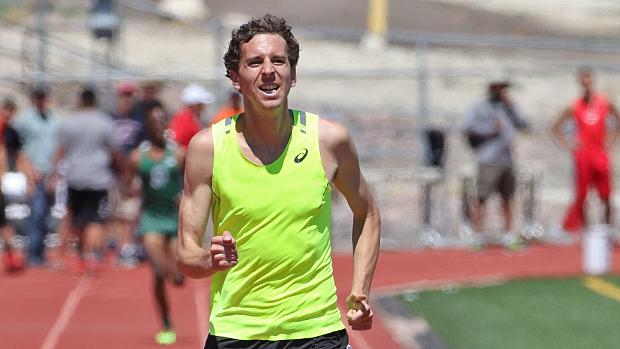 One of the faces in the crowd for Friday's attempt at a four-minute mile in Colorado was my own. I was pretty much of a skeptical mindset that it would happen on Friday, but I wanted to be there just in case. Because you never know about these things until they happen.

For two laps, it looked as if Tabor Stevens just might beat the odds and crush the four-minute barrier. Stevens came through the midway point almost precisely on pace (if anything, a hair ahead of schedule), but could not close the deal. The time with 400 meters to go was about 3:02, and the final time this year was a few hundredths either side of 4:06.

Ultimately, the wind, the heat, and the comparatively low oxygen density seemed to doom the effort from the start. You never say never, but some opportunities are better than others. Friday's opportunity certainly did not rank among the best.

So, what could we change, and what should we keep, while still maintaining the purity of the quest?

2. The field probably needs to be extended beyond competitors with Adams State connections. This was Adams State's idea and they deserve full credit for getting it off the ground, but it would add an element of excitement if the event was something more than a few current and former teammates helping pace someone from Adams State. The original four-minute mile was done that way, but--generally speaking--more direct competition adds to the excitement. And, relatively few four minute miles have been run in a pacing setting. Let's race this thing! Of course, it could turn out that there are NCAA issues associated with making this a race (at least partly) among member schools.

3. The event should be advertised further in advance. This would likely allow more interested parties to put it on their schedule and it would allow more folks to carve out time to come see it. I would be delighted to give further editions of this event wall-to-wall advance coverage on Colorado Track XC.

4. La Junta is the right place. You can go to lower elevations in Colorado, but La Junta is closer to the Front Range (and to Adams State!) than those other locations. La Junta is low enough elevation to significantly enhance the probability that a four-minute mile will eventually be achieved.

5. 1:30 in the afternoon is not the right time for this effort. Last year, the conditions in La Junta at 1:30 were actually rather favorable. This year's (unfavorable) conditions are more the norm. Warm and windy is pretty much as close to a norm as La Junta has in April. If we're serious about making a first four-minute mile happen in Colorado, we should throw this event under the lights. That would likely mean adjusting a meet schedule and bringing in a portable lighting system to throw enough light on the finish line for the finish camera to read images. It might also mean more people get to see it when it happens. You can't generally set up this sort of thing in advance take advantage of optimal oxygen density conditions, but you can provide yourself with a much higher probability of overall favorable conditions than the Jack Harris Elite Mile has to date. And, winds do typically settle down a little after the sun has gone down.

Ultimately, though, the ideas above are just the thoughts of a guy with an opinion. I have precisely zero ownership of the event, only more-than-ordinary interest in the event. I have been in attendance for several of Colorado's recent attempts at the four-minute mile. I very much hope to be there when it does happen (and it will, eventually). Nobody is obligated to share my opinion, though I trust there's something here worth listening to.