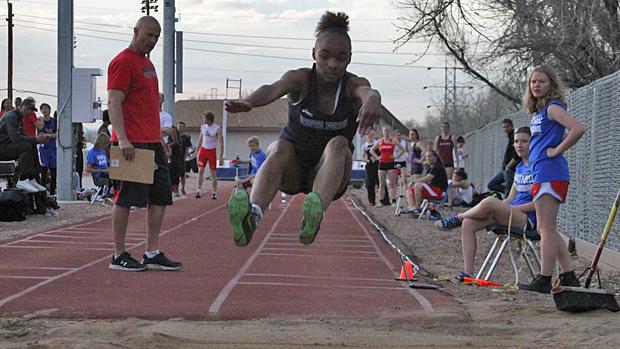 Maya Evans took over the #1 slot in the national long jump rankings at 20-6.75. Photo by Daniel Russell.

If you were feeling withdrawals of national caliber marks after the graduation of stars like Dior Hall (USC), Mary Beth Sant (University of Oregon), Chyna Ries (University of Texas), and Ally Watt (Texas A&M University) you can rest easy as the future of Colorado track and field has been rejuvenated with young top-tier talent to fill their void.

Unless you live under a rock, it is almost assured that you have heard all about Vista Peak's Maya Evans and Denver East's Arria Minor blazing up tracks all over the state this spring.

Another freshman has been silently making waves of her own this spring. If you haven't seen Rangeview's Dawnielle Lewis yet you had better take notice because this trio is going to be keeping Colorado in the national rankings for quite some time. Rock Canyon Sophomore Emily Sloan is another pivotal piece to Colorado's sprint and hurdle punch.

Just like those titans of track did just a few years ago the newest quartet of track stars gathered at this year's rendition of the Liberty Bell Invitational. They certainly did not disappoint as they all got things going Friday evening at Littleton High School.

When asked about being nationally ranked she responded, "It feels really great and I am excited that I still have two years to try to get to the top."

Into a fairly stiff headwind Evans, Minor and Lewis took the top three qualifying marks for the 100m, pursued closely by seniors Julia Hall (Arapahoe) and London Evans (Ralston Valley). Pine Creek freshman Tai Duren-Wynn threw her hat into the mix with a big PR when she posted a 12.88 in the prelims to qualify for Saturday's final.

When asked about being nationally ranked so young and having some of her top competition right in her own state Miss Minor replied, "It keeps me motivated, but it really is a lot of pressure. I still get nervous before we race because I want to stay on top. They are my friends, though, so it is nice to have that healthy competition."

Estes Park's Lily Tomasula-Martin took the 3200 crown at 11:13.43 followed closely by Denver North's Kayla Young who crossed the line at 11:15.35. Tomasula-Martin ran a very patient race for the 3200 and came back to stick to the same race plan and walk away with the 1600m title as well on Saturday as she allowed Liberty's Allison Mann to set the pace for the first 1220m before she made the bold push to the front. Her reward was a 5:18.05 and she pulled Mann along for a 5:19.69.

The city of Boulder claimed the two top spots in the 800m where Fairview's Hannah Freeman and Boulder High's Lauren Neugeboren raced to a top two finish at 2:15.65 and 2:19.15, respectively.

Julia Hall raced Pine Creek's Heide Baron for one of the top head-to-head matchups, one which comes to a final conclusion May 21st. These two have been battling back and forth for four years now and this week Hall got the better of her rival to the tune of the #1 400m time in the state 54.10.

Denver East's 4x1 bettered their season best for the year to hold onto that top spot with a time of 47.75.

The ladies mixed it up in the field events as well, and by far the largest mark of the meet came out of none other than Miss Evans who placed her name in the Liberty Bell record books and is currently tied for the #1 mark in the nation with a jump of 20-6.75. After setting the record, Evans simply stated that she is still hungry and wants to hit 21 feet this year, "It feels really good, but I really want to have the top spot all to myself."

Cheyenne Mountain's Elizabeth Wayne had a huge PR herself to finish in second place. Her jump of 18-4.75 places her third in the state for all classifications. Castle View's Sierra Suazo set a new personal best for herself and took home the throws crowns with a throw of 132-9 in the discus and a heave of 39-7 in the shotput.

The top marks of the meet certainly favored the girls, but the boys made a few waves of their own Friday and again on Saturday.

Lutheran's 1-2 punch of Matt Hanson and Kharon Hall took home the top qualifying marks for the 110h and eventually the top two times in the final. Kent Harris posted the top 200m time of the meet when he popped a 21.93 Friday evening. Harris managed to hold off a late charge from Littleton's Noah McGhee who was looking for his second win of the day. 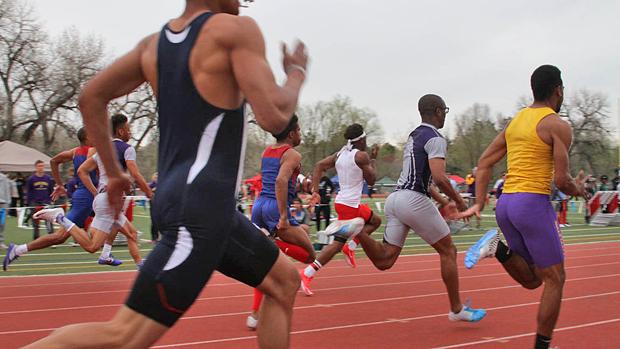 The boys 100m dash final was about as close as anyone could imagine as the top four finishers were separated by .04 seconds. McGhee got the nod nipping Regis Jesuit's Javan Lanier by .01 seconds. Fountain-Fort Carson's Christian Lyon was just behind McGhee and Lanier finishing just .02 behind McGhee.

If you weren't excited about the 5A 100m title yet, this one might be worth taking notice. That will be one race not to miss Saturday May 21st.

Lyon and the Trojans got their revenge as they took home the 4x2 title stopping the clock at 1:28.73, the #2 overall time in Colorado, topped only by Broomfield who ran their time Friday evening at the Sutler Bowl. Some fairly tense moments attended Saturday afternoon's finals as Lutheran's speed demon Chris Youngs pulled up 125m into the third leg of their 4x2. Lanier had a scare of his own pulling up 150m into the 200m final. Both athletes walked off of the track, but we hope for speedy recoveries for both just the same.

Arapahoe's Steven Goldy led four other runners under 9:35 after he ran his personal best of 9:30.06. Goldy helped lead a Liberty Bell charge on the rankings as all five runners now possess top 10 rankings for the 3200m for all classifications. Air Academy's Ethan Powell broke away during the final 50m of the 1600 to set a new PR of 4:28.82 and take home the event title.

In the field events Regis Jesuit's Austin Campbell got back to his usual self in the high jump taking the crown at 6-9. Lutheran's Adam Dawson has still yet to be beaten in the discus as he heaved a 161-10. If you haven't heard of Palmer triple jumper William Ross yet, here is your introduction. Ross set a new PR of nearly two feet after he leaped 46-2.75 into a 2.0 headwind and giving him the second-best jump in the state so far this year. Ross assured me that he wasn't finished just yet so be sure to keep an eye on the jump pits if you are anywhere near the Terrors.

This year's Liberty Bell certainly did not disappoint all those who came out for the show. Now it's on to Niwot-and-Valor Christian's Colorado Meet of Champions.