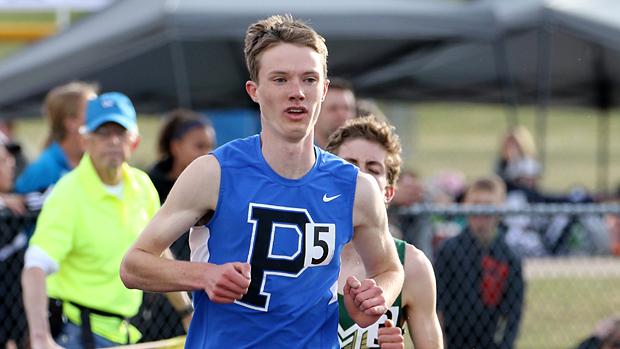 Henry Raymond's 9:22 in the 3200 went to the top of the 5A charts and to #2 overall on the season. Colorado Track XC file photo by Alan Versaw.

Henry Raymond didn't let the pace lag, not even from the outset of the race.

An opening quarter of 63 seconds led to a 4:35 through the halfway point of a 9:22 winning 3,200 at the Front Range League Championships. The Poudre senior had a dominant solo effort during the first day of the league meet at Elizabeth Kennedy Stadium in Broomfield while conquering a field with unprecedented depth-12 entries had run 9:55 or quicker.

For Raymond, dominance has become commonplace in 2016 during his final season for the Impalas. Not only does he rank No. 1 in Class 5A in both the 800 (1:54) and 1,600 (4:17), but his 9:22 effort puts him atop the leaderboard in the 3,200 as well. Those who follow Colorado distance running closely may have seen this coming, to some extent, as Raymond's cross country credentials (4th in 5A XC, 5th at Nike Southwest in a PR of 14:55, 13th at Nike Cross Nationals) have allowed him to build a reputation and resume that ranks among the state's finest competitors in any discipline. Still, the tall and lanky distance stalwart is having quite the season.

Dylan Ko, a junior at Fossil Ridge, was the runner-up in the 3,200 on Wednesday while shaving 13 seconds off his personal best with a 9:38. Jake Mitchem (9:44), back in the fold for Broomfield, worked together with teammate Jared Durney (9:46) to place third and fourth.

On an opening day of mostly prelims on the track with only finals in the 3,200 and 3,200 relays, along with finals in the boys discus, boys long jump, boys pole vault, girls shot put, girls triple jump, and girls high jump, a number of winners and first-place finishers in prelims proved their worth again in the conference and across the state.

Horizon's Megan Mooney (10:53) pulled away from Rocky Mountain's Kacey Doner (11:26) and Fort Collins' Lauren Gregory to claim the eight-lapper on the girls side. In a race that eventually came down to two, Mooney and Gregory, Gregory pulled off to the infield with a lap to go, perhaps feeling the effects of such warm temperatures for track's longest event. Broomfield's Ivy Gonzales (11:29) came through in third.

The boys 3,200 relay from Boulder-Eli Fournier, Isaac Fournier, Gage Hornung, and Sam Primozich- battled Fort Collins before pulling away and blistering a 5A best time of 7:59.98 to hold off the Lambkins (8:02.01). The ladies from Horizon, with the Mooney sisters, Megan and Madison, bookending the relay, also claimed a 5A best of 9:29 in an excellent race against Rocky Mountain (9:30).

One of 5A's top boys teams, the host Broomfield Eagles, had three soar under 40 seconds in the 300 hurdles as Johnathan Penrose (39.14), Dalton Ill (39.38) and Mitchell Gorman (39.75) cemented themselves as forces in the state's highest classification, if they weren't already. The youngest of the trio, Gorman, a sophomore, now ranks 6th in 5A in the event.

Winning efforts by freshman Max Manson of Monarch (14-6) in the pole vault over Fairview's Eli Chance (also 14-6), Zac Bitton of Greeley West (21-6.5) in the long jump, Alex Koschel of Loveland (37-5.25) in the triple jump, and Rocky Mountain's Marco Colbray (154-6) in the discus provided each their first-ever Front Range League titles. Koschel became the first Loveland Indian in school history to go 37-plus feet in the triple.

Rocky Mountain super sophomore Gabriella McDonald defended her crown in the shot put with a toss of 40-1.5, a new personal best for the potential 5A queen of both throws. Audra Koopman added to her legacy for Fort Collins while winning the high jump in clearing 5-4.

The Front Range League Championships will resume on Friday at 4:00 p.m. at Elizabeth Kennedy Stadium at Broomfield High School.