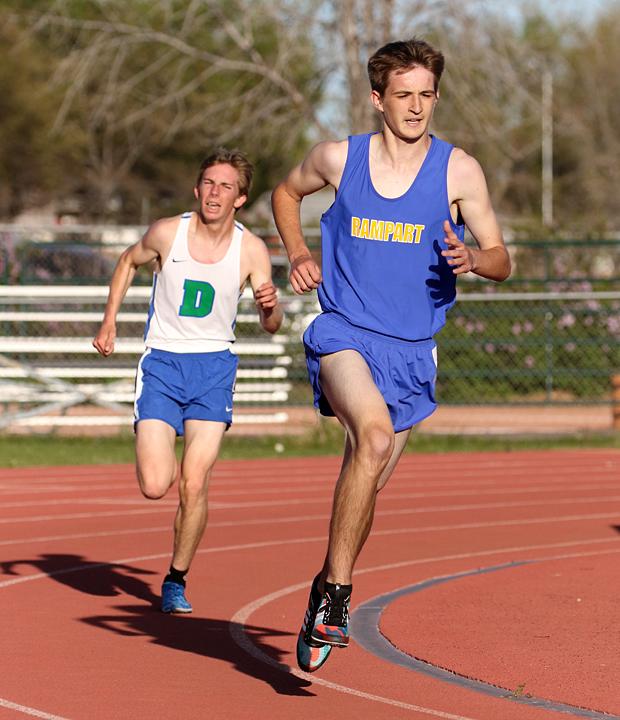 Rampart's Robert Richardson introduced himself to this week's circle of winners with a last-lap pass of Doherty's Hayden Martinez. Photo by Alan Versaw.

If you were looking for surprises in Day One of the Colorado Springs Metro League meet, those were fairly difficult to come by. Several events, including the 400, 5A 3200s, 4A 1600s, 4x800s, 4x200s, and roughly half of the field events completed finals and managed to do so without any stunning upsets.

Tanner Norman and Ellie Enderle claimed the 4A 1600 titles, while the 5A 3200 titles went to Claire Northway and Robert Richardson, both of Rampart. And, I would dare to say the Richardson's name is the one--of all of Thursday's event winners--that has enjoyed the least exposure to date. Perhaps that changes now...

Field event titles went to Conor Bertles, Gina Coleman, Celia Smith, RaeAnn Queener, Giovanni Jackson, Alexis Buckhaults, Logan Prater, Heidi Beier, Blake Standring, Jackson Wibbels, and Will Ross. If you know your Colorado Springs area 4A and 5A field eventers, you can pretty well go down the list and match athletes to events there. But, to clarify, boys were long jumping and girls triple jumping; boys were slinging the discus and girls shoving the shot. There were no 4A boys pole vaulters, so that title goes vacant for at least a year.

Gina Coleman's 39-4 in the shot put probably stands out as the best advancement on a qualifying mark from Thursday's action, though most of the relay winners (Doherty - 5A SMR8, Canon City - 4A Girls 4x800, The Classical Academy - 4A Boys 4x800, Coronado - 5A Boys and Girls 4x800, Widefield - 4A Girls 4x200, Canon City - 4A Boys 4x200) saw at least modest improvements in their previous season-best times.

In team scoring, TCA leads both genders of 4A. Coronado tops 5A girls, and Rampart tops 5A boys, but Fountain-Fort Carson should be lined up for an enormous day of finals on Saturday.