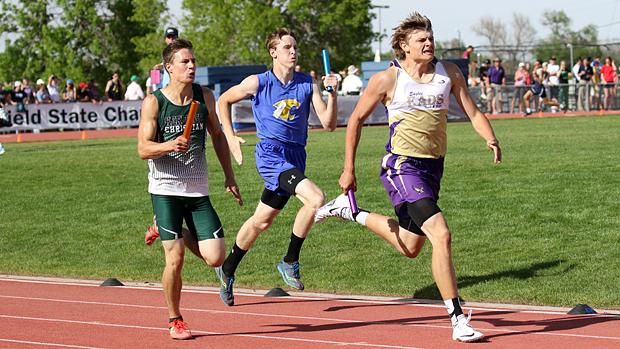 Although Heritage Christian Academy didn't win many event titles on their way to a state championship, they did end up claiming the last title of the meet after a see-saw battle with Eads. Photo by Alan Versaw.

The longhorn was, and is, a breed of cattle nicely adapted to survival on the meager vegetation of the dry, open range land typical of the southern plains. But, on the lush infield turf of Jeffco Stadium that is anything but open range, Springfield's Longhorns met their match in the form of the Heritage Christian Academy Eagles.

Ultimately, it came down to the same kind of numbers game that 3A Girls came down to. Springfield brought several point-scoring athletes to the state meet, just not as many as Heritage Christian Academy.

It wasn't so much that HCA dominated the distance events. Indeed, their only first in the events went to Luke Gilliland in the 3200. It was that the Eagles were able to flood the board with points in the distance events in a fashion that Springfield was powerless to match.

Moral to the story: never underestimate the value of a solid cross country program to a 1A or 2A track and field program. If you want to win a state title in the small school ranks, it behooves you to be able to score a representative sum of points in the distance events.

The rest of the meet was a well-pitched battle between two outstanding 1A programs. Springfield posted big points with Rafe Hutches in the 200 and 400, the 4x200 relay, Dillon Fisher in the jumps, and Andy Borunda and Keith Tate in the throws.

HCA counter-punched with big contributions from Jeff Stellingwerf and Caleb Wickstrom and a winning 4x400 meter relay. Mostly, however, HCA was content to keep the points coming in at a steady trickle. 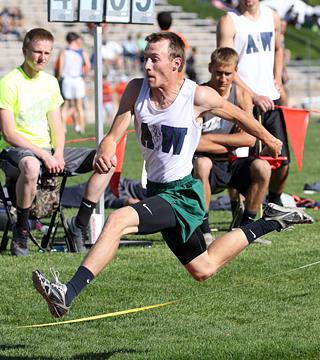 As announcer Brett Shanklin noted at some point on Saturday, the relative newness of the 1A classification means some of the meet records are not as hardened as they are in the larger classifications. Thus, to nobody's great surprise, we saw a few of those records fall over the weekend.

Cameron Klann moved Kyle English's long jump record a few miles west along I-70 with a winning leap of 21-11.75. Trent Leoffler (photo, right) took English's triple jump mark a few miles north and west, mostly along Colorado 59 (the summer home of countless Horned Larks and Lark Buntings), to Arickaree. Ian Beckett snared the state high jump record away from the Western Slope, stopping just shy of the Kansas border at McClave. Jordan Cherin brought the 400 and 800 meter records to the unlikely 1A destination of Boulder.

Cameron Klann, who also won the long jump, was the only one standing between Cherin and four event titles.

Pawnee's Luke Duggan came to the state meet with hopes of revising the 1600 meter record downward but met up with less-than-completely-desirable conditions and nobody to chase. Nevertheless, Duggan's career comes to a close as the best 1A 1600/3200 career to date.