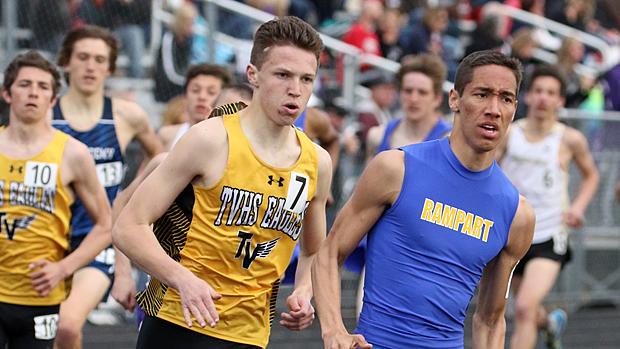 Billed as a scenic tour of local roads, this race evidently has a lot of up and down to it. Estes Park harriers Finn Tierney (19:27) and Lily Tomasula-Martin (21:58) took top high school honors. Cherry Creek grad Kristin Johansen was the top female finisher at 20:50).

High school participation in this one was kind of light, but there were a couple noteworthy results. Ralston Valley's Nick Nowlen won the men's division with an 18:13. Centaurus senior-to-be Sabrina Stern took top honors among the female high schoolers with a 21:47.

As per usual, this race was loaded with some big names. So, you have to dig a little to find the high school finishers. I show David Fraser (a junior at Boulder this fall) as the top high schooler among male finishers at 14:03. The corresponding female distinction belongs to Sarah King (Fairview) at 19:46. If you can remember back as far as when Monarch's Maddie Alm was in high school, she was the top American finisher among the females at 13:53, and that left a whole lot of males in her wake.

Taylor Stack came back to win this one by over a minute in 17:10. Taylor's mom finished second in the women's division, proving at least some of what Taylor comes by is genetic. Top finishers among those still in high school this fall were Buena Vista's own Ashton Galyean (22:12) and Salida's Abby Ceglowski (24:12). As a side note, Taryn Ceglowski is still not back to running yet (but soon).

This functioned more or less as a Mountain Vista team time trial. Two former Colorado high school runners--Paxton Smith and Keifer Johnson--led the way. Top returning high schoolers included a bundle of Mountain Vista and SkyView Academy boys in under 19 minutes. The Mountain Vista girls started arriving en masse at about 21 minutes. Obviously, Vista Nation wasn't showing everything at this one, but there was a hint or two to be picked up.

Thompson Valley seemed most interested in showing up for this one. Even the new coach's wife showed up among the finishers. Two young men out of Nebraska took top high school honors here, but not far behind were the likes of Sam Hitchens (17:57), Lauren Offerman (19:33) and Kenadi Krueger (20:48). Krueger figures as a big addition for TV this fall--perhaps you caught her act at NXR-SW last November..

It wasn't all fun and games if you're from Palmer Ridge...

Eric Hamer came back and gave everyone a reminder of what it's like to watch his backside disappear into the distance. Max Martinez claimed top honors among those with high school eligibility remaining, running 21:30 for four downhill trail miles at a little less than 2% average grade. He had to edge out Ethan Powell at the finish line for said honors, however. The nice little 4A matchup there should extend well into the fall season; this was merely prologue. Cole Munoz and Andrew Rudnicki were a little over 22 minutes, then came the masses. Among those masses, by the way, was Caleb Ojennes.

Arturo Toro of Greeley West led the high school contingent at this one with an 18:17. Windsor's Morgan Hykes appears to have claimed high school honors for females at 21:36.

I'm not sure exactly what the gradient on this thing is (except that it's limited in that there's only so much downhill you can achieve in Louisville), but if Libby Moore is the Elizabeth Moore who runs for Monarch, she took top high school female honors in 5:30. Side-by-side with more was Delaney Gilfillan (you might recognize that surname) out of Denver. I believe Gilfillan is still a year out of high school.

Kade Leonard out of Berthoud stopped his race clock at 4:52 for high school honors among the boys. As a sidebar here, Kade was 15 seconds ahead of sister Kiah and one second ahead of, wait for it..., Tommy Gilfillan (who should show up in high school in the Denver area this fall).

Max Manson was the top finishing pole vaulter in 5:27.

The Denver North folks love running in Wiggins. This was as much an alumni meeting for Denver North as it was a summer time trial for the current crop of Vikings. Kayla Young beat all high schoolers, regardless of gender, with an 18:30. Noah Rojo led the high school boys with an 18:47. Rojo wears Fort Morgan colors in the fall. Behind Young and Rojo came a veritable flood of high school runners.

Yes, there were more road races over the weekend, but of ones where I've been able to find results with more than just one or two high schoolers in the results, this is what I have. If you know of more results with high schoolers included, please point me in the right direction and I will amend this article.