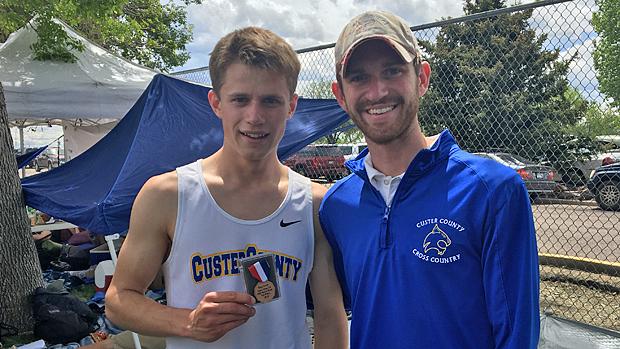 But, Swartz will now be hunting in a much larger jungle. Having made his presence known in the 2A ranks, Swartz now sets his sights on the 5A ranks, heading up the Pomona cross country program.

Swartz is still new to Colorado, having arrived here from New York in the spring of 2013. But, he's done very well with any necessary adjustments so far.

Swartz explained, "I took a position at Custer County because I was tired of not having a teaching job in New York... I started to apply to schools around the country, got a phone call back from Custer County, and the rest is history. I taught for a year before taking over the distance program at Custer County. I was fortunate enough to have runners such as Corey Lewenkamp, Michael Franta, Kayla Carter and Jerald Taylor during my time there. Those athletes and teams accomplished a lot in a short period of time for me."

But an opportunity at a teaching position in a larger school district with some new opportunities came knocking.

Swartz packed his bags and made the move to Arvada early this summer. But, with that move came the realization that he would likely be out of coaching for at least a year.

Swartz, however, met Dakota Ridge coach Mark Stenbeck at the CHSCA All-State race in June. Stenbeck knew Steve Urban at Pomona was looking to groom a replacement, and helped him make the connection.

"Before that I had accepted the fact that I could be out of coaching for the year, having just moved and starting at a new school, but after meeting with Coach Urban, Pomona was a perfect fit."

And Urban has helped to ensure that the transition move as smoothly as possible.

"Steve and I talk once or twice a week. I cannot begin to thank him for the help he has provided these past few weeks with the transition. The program is a well-run machine, and all I have had to do is come in and keep things moving forward. Now that the kids seem to be a little more settled, I will start putting my own mark on the program, but I don't think this type of transition would be possible without the support I have received from Steve."

One immediate difference Swartz has already noted at Pomona is the relative ease with which summer workouts happen. At Custer County, a summer run meant dragging kids together from distances of many miles. Needless to say, the attendance area is a bit smaller at Pomona. And, attendance at summer workouts to date has been both solid and enthusiastic.

Like most cross country coaches, Swartz has a lengthy background in running. His high school team in Buffalo, New York, accumulated a perfect record in league duals his senior year. He would go on to run four years of track and cross country at DIII Plattsburg State in upstate New York. In track, his specialty event was the steeplechase--an event he confesses that he would like to see a lot more of here in Colorado.

For now, though, it's all about taking the familiar silver, black, and scarlet of Pomona and making certain it remains a serious burr under the saddle for the larger 5A programs they compete against.