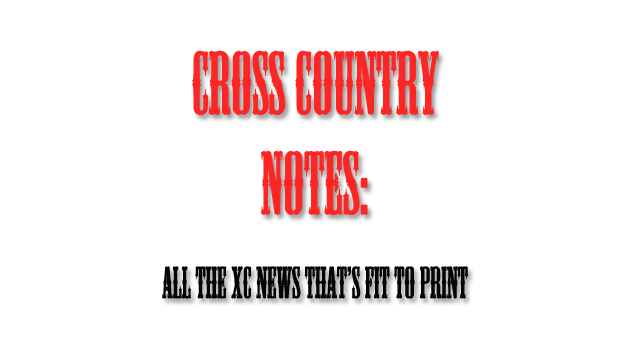 Back home again after a trip to Gypsum to cover the Eagle Valley Invitational and an extension to see my father in Grand Junction, I face the realization that the pile of things to get done staring me in the face is a little overwhelming.

So, I'm going to work through a few of them here, though perhaps in less detailed fashion than I had hoped.

Certainly one of the most beautiful cross country settings in the state is in Gypsum, Colorado, home of the Eagle Valley Invitational. Golf course green isn't exactly a natural habitat here in Colorado, but it is a very attractive cross country setting nonetheless. And, the course rolls plenty over its 5000 meters. Particularly aesthetic is the finish. Unlike so many courses around the state this one actually finishes into the light (as opposed to away from it) and the backdrop of the barren hills on the far side of I-70 above the trees along the Colorado River is actually pretty close to stunning.

I liked the visual appeal of the Eagle Valley Invitational the first time I was there. I liked it even more when I went back this weekend. Plus, it's become a pretty solid meet over the years as well.

Last weekend, the World Mountain Running Championships were contested in Sapareva Banya, Bulgaria. And, in the Junior Division, you should recognize several of the names.

Joseph Benson (Timpanogos, UT, and current member of the Timpanogos High School cross country team) was the top American finisher in 11th. His time was 38:13 over 7.3 km. That should give you some sort of an idea of the difficulty of the course.

More familiar to Colorado readers here, though, would be Ben Butler in 27th at 40:25. This makes back-to-back years in the World Mountain Running Championships for Butler, the 2016 SkyView Academy graduate and current Oklahoma State University team member.

Over on the Junior Women's side, Soleil Gaylord collected a 30th-place finish in 27:07 over a 3.5 km course. Julia Jaschke was a DNS for the race.

Unfortunately, press coverage--even from USATF--has been just about non-existent for this event, so I don't have a lot of details to share with you.

At this point in time, I do not know of any Colorado high school teams headed to the Griak, Nike Portland, or Bob Firman meets this coming weekend, but it probably would be premature to conclude that there aren't any. I do have word that Roosevelt High School is pointing their travel wagon to Stillwater, Oklahoma, for the Oklahoma State Cowboy Jamboree. So, there will be at least those out-of-state results to be paying attention to for next weekend.

And, of course, we're all reeling a little over the tragic loss of Brandon Ries over the weekend. There may be a follow-on article about that sometime this week (or possibly later) if there ends up being something the Peak to Peak community wishes to do or say in his honor. The timing and content of that would, of course, be up to them, but I am happy to help support anything they would like to do in that regard.

I've had a number of emails (probably into the double digits by now) of people asking me why such-and-such a school is not in the "right" classification when they do rankings. So, I'm going to offer an explanation here.

There are a lot of different "leagues" under the League dropdown under rankings. If you are doing rankings or virtual meets for the current cross country season, you want to select one of the "2016-18 ..." set of leagues. Those are the ones that are updated for each classification for the current season.

The most common problem to date has been with people selecting one of the "_A State XC Teams" leagues. These leagues are populated with the teams that qualified for last year's state meet. In theory, I could delete these "leagues," but this league option becomes very popular for doing virtual meets in the week leading up to state. These leagues are also invaluable to me as I try to write state meet previews, and they are a colossal pain to recreate each year--especially so at a time of the season where I just don't have much time to go create leagues. So, I leave these "leagues" up year-round now. I will update them for this year when it is determined which teams have advanced to state. You're welcome to use them, just understand what you're getting when you do. If you want all of this year's 4A cross country teams, please select the 2016-18 4A XC league under Classification.

That's all for now!