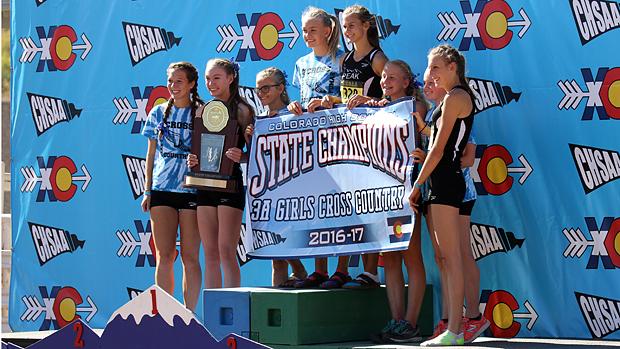 For the better part of an entire agonizing minute, the entire 3A Girls race threatened to unravel right before the eyes of the spectators gathered in the stadium.

With the finish line clock still showing less than 18 minutes elapsed, Quinn McConnell entered the open end of the stadium to the enthusiastic applause of those gathered. Moments later, Denver North's Kayla Young entered the stadium as well, still dogged in her pursuit of McConnell.

Only a few strides into the stadium, however, Young's legs went wobbly and she stumbled to the ground, her hopes of catching McConnell evidently cruelly dashed. 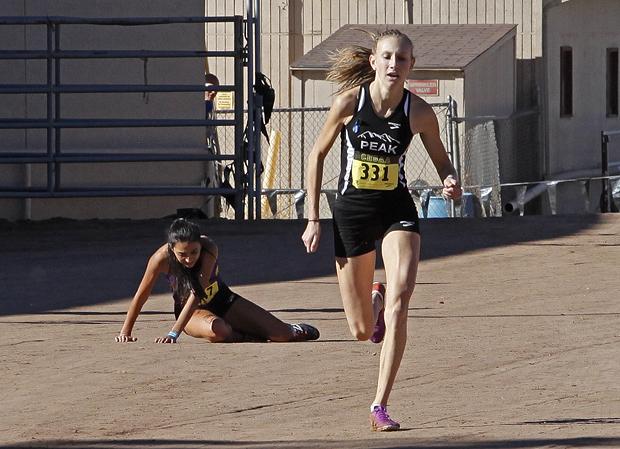 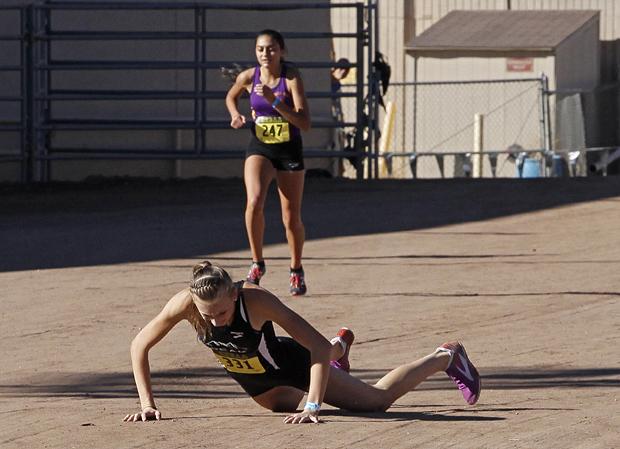 Yet, no sooner had Young regained her feet than McConnell went down in front of her. McConnell's legs, too, had lost their starch and refused to respond with obedience to the command to press on toward the finish line.

McConnell regained her feet, then almost as soon as she started again, she tumbled back to the dirt. Young, though still showing signs of disorientation herself, moved on by and would keep her feet through to the finish line.

McConnell would regain her feet again; she angled awkwardly, first one direction and then another, but making general progress toward the finish line. Meanwhile, McConnell's teammate Anna Shults had entered the stadium and was navigating a more conventional approach to the finish line.

In the eye of my recollection, I thought Shults moved past the finish line before McConnell fell across it, but the sensor's order of chip recognition had McConnell ahead of Shults. In any case, it was close. And ultimately inconsequential.

For all of McConnell's stumbling and weaving, however, she ended up losing but a single place. Had she been a competitor running more toward the masses of the field, the play of her labored approach to the finish line would have exacted a much steeper price in the team tally. As it was, Peak to Peak started their scoring with a 2 and a 3.

For three miles, McConnell had pounded on Young, trying to shake the latter's resistance. For three miles, Young stayed close enough to remain a threat. And though the heat had not yet built to the oven-like quality it would display later in the day, the toll was evident on both McConnell's and Young's faces as they came out of the creek and up the two steps to stadium level.

Anna Shults was seemingly out of title contention in third, though that would change inside the stadium.

It would go all the way to Winter Boese in seventh place before a representative of a team with any kind of hope of catching Peak to Peak would cross the line. As a result, Peak to Peak was able to dodge a scoring bullet that seemed, for a moment or two, capable of undoing what was likely regarded as the most certain outcome of the entire day.

The rest of the Peak to Peak scoring order made short work of closing the deal. Tiana Bradfield crossed in 12th, Rachael Metzler in 21st, and Elle Triem in 23rd. At that point, only Steamboat Springs and The Classical Academy had as many as three finishers across the line. Peak to Peak would prevail with 57 points. TCA ended up as the only other team under 100 with 94.

TCA's effort would be headlined by the trio of Katie Flaherty, Chantae Steele, and McKenzie Elliott in places 9, 11, and 13. Steamboat would eventually settle for fourth, but the front three of Boese, Sadie Cotton, and Maggi Congdon had set the Sailors up well in places 7, 17, and 18.

And, if you've been paying attention through the season, you understand well the impact the presence of the schools dropping down from 4A this year has exerted on the 3A landscape. Of the top ten team finishers in yesterday's race, only Peak to Peak (1st), Salida (3rd), Alamosa (6th), and Frontier Academy (8th) were members of last year's 3A classification.

Get all of MileSplit's hottest content delivered to your email inbox!