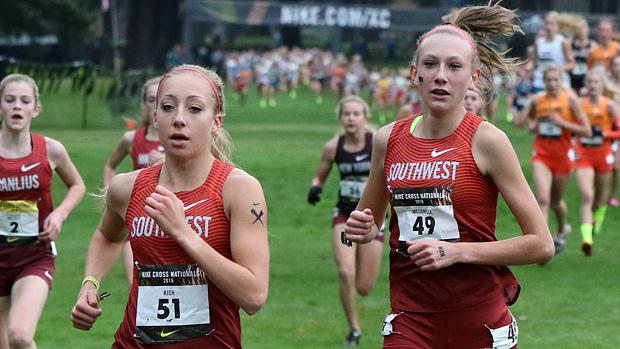 Whitney Rich and Quinn McConnell ensured that all six of the Southwest region individual qualifiers landed in the top 20. Photo by Alan Versaw.

No one year is exactly like any other year, but it's difficult to miss noticing some trends developing in terms of comparative strengths of the nine NXN regions. I won't try to build a long historical perspective here, but I will discuss what turned out to be the case this year.

Boys will be discussed on the next page, and girls the following page.

Before we get to those discussions, though, I'll let the cat out of the bag and say that the Southwest region, once again, performed very well at NXN. We could speculate at length on the reasons for that--which doubtlessly vary some from Southwest program to Southwest program--but one compelling theory is that altitude training translates well to performance on a soft, muddy course such as we find at Nike Cross Nationals.