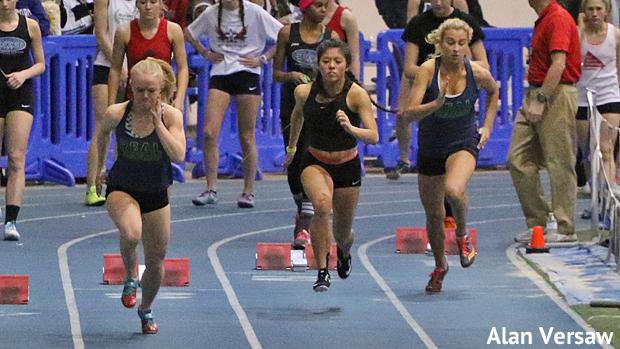 They'll be off and running again at the Cadet Field House on Sunday.

The week just behind us turned up a couple of surprises, at least it did for me.

FK Elite and Maya Evans ended up at the Texas A&M High School Indoor Classic. Lauren Gregory ended up in, of all places, Scotland. And, perhaps somebody else ended up someplace else that I still have yet to learn about. If so, it wouldn't be the first time.

There is potential for that to happen again this week. Most especially, the Carl Lewis and University of Arkansas Invitationals both take place this Saturday. These meets have drawn some Colorado talent in recent years and could again this weekend. A bit closer to home, there is the Stadium Sports Grill Classic in Spearfish, South Dakota. That meet has drawn a Colorado team or two in its history as well. I'm told the guys with profound hearing loss who look a little like extras for the cast of Duck Dynasty have long since roared out of town, leaving plenty of hotel space.

But, there are also excellent options closer to home this weekend. It so happens they both are named after Dr. Martin Luther King, Jr., which could add a layer of confusion to the weekend preview. So, I'll try extra hard to be clear here...

Saturday's offering is in Albuquerque, New Mexico, at the downtown convention center. This one goes by the name of the Martin Luther King Jr Indoor Classic. At this moment, Colorado registrations for the meet are running light, but there is still plenty of time for that to change. Action begins at 4 PM in the Duke City. Typically, the Albuquerque meets draw best from Cortez, Durango, and Alamosa, though their gravitational pull has been known to extend beyond these three southern tier Colorado cities.

Sunday's offering is still closer to home. USATF-Colorado is running the Martin Luther King Mile High Classic at the Cadet Field House of the Air Force Academy. I don't have a window into registration for this meet, but registration typically runs very strong for this one. This is no reason for this year to come up as an exception. We don't yet know what the highlighted showdowns will be, but we can be sure there will be showdowns of national import.

High school action for the Martin Luther King Mile High Classic is scheduled to begin at noon. That's a bit dependent on getting the younger age groups done by that time, but these meets have achieved a level of efficiency where that standard is nearly always met.

For those who do their track and field on a pole, travel beckons this weekend in the form of the National Pole Vault Summit. Provided the Reno Livestock Event Center doesn't get flooded out this week, that is. Yes, even indoor track and field has to pay attention to the weather forecast now and then...

Colorado Track XC will be on-hand for the high school portion of the Martin Luther King Mile High Classic.