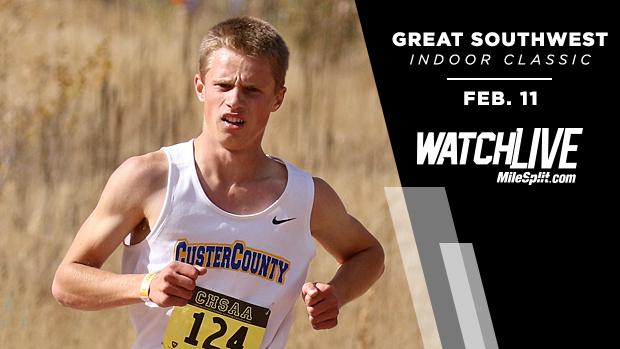 Jerald Taylor is one of several top Colorado athletes at Great Southwest this weekend.

Think of this as your handy-dandy guide to the best of the weekend, from a Colorado perspective.

The entries are in for the Western State High School Indoor Open. There's another almost another full day yet of entries for Great Southwest. So, conceivably, some additional nice match-ups at Great Southwest could show up today, but we'll keep our eyes fixed on what we're seeing from the entries right now.

I'm dying to know how Ruby Brown does in the girls version of the 1600 steeple. She's only tied as the top seed (although, admittedly, everything is guesswork with these seeds), but she was busy working her hurdle game last weekend at the Air Force High School Indoor Open. The Palmer Ridge girls should have their hands full with the Salida freshman.

The boys 1600 steeple should be every bit as good, though without a Palmer Ridge flavor to it this year. Sadio Fenner has plenty of height and would appear to have an advantage over the barriers on account of that, but Tad Trimarco and Camden Gillis have shown moxey. That comes in handy in a steeplechase, too. Kieron Brunner has been having a nice indoor campaign and just might end up in the mix as well.

The girls 1600 looks like a repeat of last year's photo finish in the 800. It's Lilli Hamilton vs. Taryn Ceglowski. And both need to watch their backsides a bit on account of Katelyn Mitchem.

But, the undisputed showdown of the meet comes in the boys 1600...

Remember the finish of 4A boys cross country? It's Ian Meek and Ethan Powell all over again, folks. Throw in Evan Graff and a handful of Palmer Ridge's best, and you have something special on your hands. Showdowns don't get much better than this.

By the way, Meek also comes back in the 400. We'll see how far his legendary toughness takes him in an event that's a bit on the short side of his usual fare. It would be unwise to discount his chances, especially on a track with tight turns that tend to favor runners of Meek's kind of build.

The top heat of the boys 200 looks like one to make sure you have a front-row seat for as well. That one pits Bryce Coop vs. Ty Grant vs. Brock Miller vs. Sunday Abarca. I have no idea right now whose chances I like best. Looks like a stirring race to me!

There's really no match-up involved, but it's been a while since we saw Katie Hyke pitch the shot put. Can she pick up where she left off at last year's state meet?

Arria Minor just showed up on the entry lists today. And, honestly, the idea of Minor tackling the banked Mondo turns of the Albuquerque oval for 200 meters is just a little exciting. There's very good reason to think she lowers her nation-leading mark in the event on Saturday. Maybe, just maybe, Anaya Bailey out of Chandler, Arizona, can push Minor just a little. We'll hold out hope for somethign special here.

Anna Hall's 400 opportunity pits her against three other girls with 57-or-better seeds. This one could be a dandy. Positioning is so important in an indoor 400.

The top three seeds in the 800 are Colorado girls--Emily Gallegos-Francksen, Chantae Steele, and MaLeigha Menegatti. They can all rest assured that the #4 seed, Alexis Gourrier out of Nevada has the wheels to keep things interesting as well. This could end up being one of the best races of the evening. Winning will likely require 2:16 or better.

Colorado mile entries Jerald Taylor and Brock Helvey will have their hands full with the likes of Aaron Gilliam and Adam Cortez out of El Paso. Taylor has a chance at a double play in the 3200 later in the evening.

Anna Hall probably has no peers in the high jump, but perhaps she can bag a meet record and shore up one of the softer meet records.

All this and more coming your way this weekend! We have no live stream of the Western State High School Indoor Open to offer, but you can tune in (if you're already a MileSplit Pro member) or sign up now for the Great Southwest live stream.