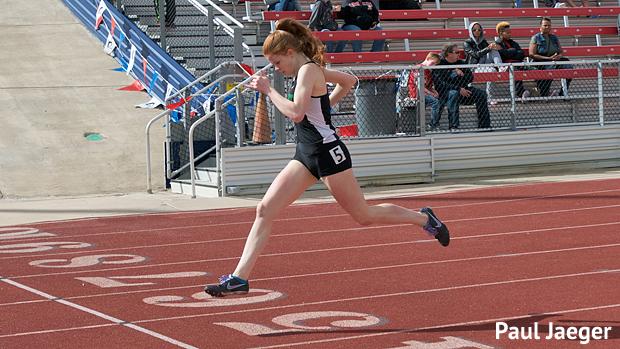 Mary Gillett reaches for the finish line, an instant before 57.76.

They shoehorned them in for this meet. Better than 25 teams wormed their ways into the CSU-Pueblo Thunderbowl for a very impressive March day of track and field.

A couple of the teams in attendance were managing split squads on the weekend, but nobody seemed to mind all that much.

I don't yet have a photo of it (and I will add it here if I get one), but Rylee Anderson wasted no time making the prediction of her being right in line for a new 4A classification record look like an educated piece of foresight.

Anderson cleared 5-10 to tie the all-time 4A class mark that was formerly the exclusive property of Amy Bladow. I'll make an observation here that it has been a long, long time here in Colorado since a high school girl has cleared six feet in the high jump.

We might have to start thinking of Silver Creek as the school of field event records if that happens this spring.

Mary Gillett tallied a grand slam of event titles, taking the 100, 200, 400, and the long jump, the lattermost of those by edging teammate Alexis Carroll by a better second-best jump. It doesn't matter how you win...

Maria Mettler laid to waste her previous PR in the 3200 and visited the south side of 11 minutes. 10:55.97, to be more precise, leaving the poor soul running the camera of curse his fate of having to sort out images of a bunch of lapped runners.

Haley Bender's 38-10 established an early 3A standard in the shot put.

The boys tallied a few highlights of their own. 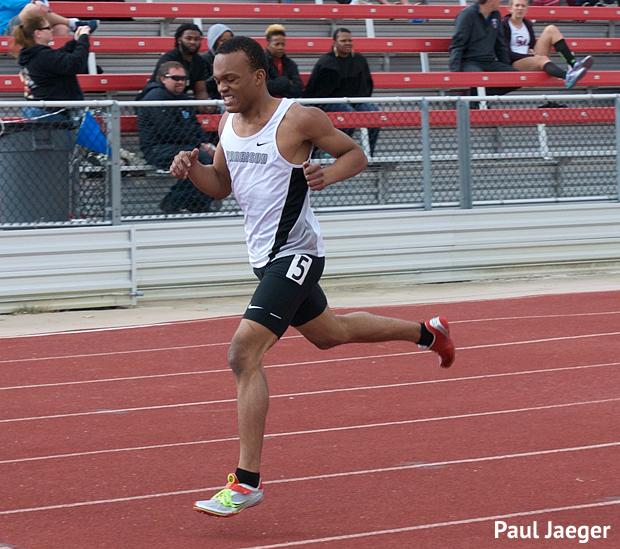 Harrison freshman Tyrese Van Horne sent a message in the 400, winning in 51.58. Van Horne, by virtue of being entered without a seed mark, improbably won the 400 from the third of ten heats. His third-place finish in the 200 wasn't bad, either.

Cal Banta edged James Lee in the 800, both under two minutes. Lee, however, had an earlier win in the 1600 and teammate Brock Dykema would later add one in the 3200. It was a nice day for Silver Creek distance.

Speaking of Silver Creek (again), Brock Knechtel tallied a pair of triumphs in the throws.

Cheyenne Mountain freshman Jaden Harrison stunned with a 41-3.5 winner in the triple jump. And Mullen's Wind Henderson went 21-2.5 to win the long jump. Henderson may be taking a page out of the Boulder High School playbook. Maybe if "Wind" is in your name, the wind doesn't feel like it needs to shout quite as loudly when you're around?

And, Palmer Ridge got their first dividends out of Maccee Reed. The erstwhile Dakota Ridge jumper won the high jump at 6-2.