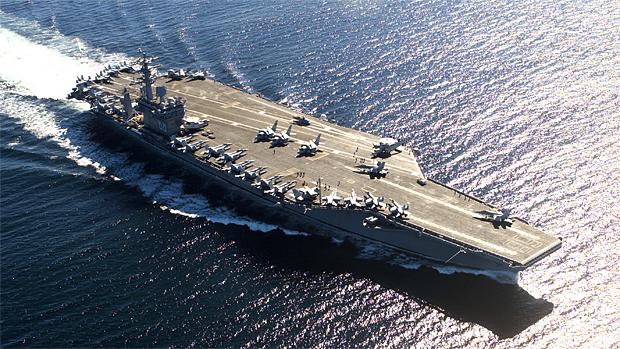 Something I wrote in an article yesterday has spun up a lot of attention...

In yesterday's article touching on all sorts of things about track and field that alternately get my goat or tickle my funny bone I commented, rather dogmatically, that referring to field eventers about to come up for their trials as "on deck" and "on hold" is incorrect. I stated that the correct usage would be "on deck" and "in the hole."

Well, that has spun up a whole lot of conversation, mostly offline, though some has spilled over into the comments on the article.

Ben Hershelman even corrected the lead sentence in my article, telling me "On the contrary, I do visit Colorado Track XC to hear you rant about things."

Thank you, Ben, and now here's a little more ranting for you...

Following World War II, when aircraft carriers first came into wartime use, lots of men came home to the United States with many hours of experience launching planes off the decks of ships called aircraft carriers.

As you can see from the aircraft carrier photo at the top of this article, the runway for getting that fighter jet off the deck of the ship isn't very long. Which is to suggest that you can only launch one fighter at a time, implying that there's an order to follow when getting multiple fighters launched.

I refer you here to the unsourced Wikipedia article about the origins of "on deck" and "in the hole" as baseball terms.

Referring to "in the hold" is also problematic in that is flies in the face of at least 50 years of baseball usage. I'm old enough to recall going to my uncle's baseball games and watching countless Detroit Tigers games on television as far back as the mid 1960s. I can unequivocally affirm for you that not once was "in the hold" (much less "on hold") ever used as a substitute for "in the hole."

Every kid in the nation who paid any sort of attention to baseball whatsoever knew the expression was "in the hole." It is an exercise in abject stupidity to try to argue anything else.

Honestly, it's not terribly surprising that the aforementioned Wikipedia article doesn't (or can't) list sources. Usages like this jump up without anybody writing down the rules. You have all sorts of servicemen coming home after World War II and the phrases they used in service suddenly start showing up in everyday parlance. Nobody asked permission or wrote rules, they simply carried over the language they used in the service of their country to ordinary life.

I suspect the best verification of "on deck" and "in the hole" you're going to find is to talk to someone who served on an aircraft carrier, preferably someone who did so in the 1940s or 1950s. These men are now getting very old, so you'd better have that conversation soon. I have no relatives or close acquaintances I can ask or I would have already.

All that said, this same question troubled the mind of Jeff Boele (former Lyons High School assistant track coach) before it troubled my mind. So, Jeff did some research on this topic long before I wrote an article touching on the topic. That research came rushing back into his mind as he read my article yesterday.

Jeff was kind enough to forward me copies of these documents. This is the relevant section of the USATF throws document:

The Head Event Judge or recorder calls the competitor up to begin his or her trial. This is normally done by saying, ---- is up (about to compete), ----- is on deck (next to compete) and ---- is on hold or at the ready (second in line to compete).

And so it is we have a parting of the ways here.

Clearly, the "on hold" formula has worked its way into common usage, at least as far as the world of track and field is concerned.

My strong and personal bias is toward using phrases as they were originally developed, not as people later came to mangle them (as an example, it's still correct to say "I couldn't care less" even though the common usage these days is seemingly "I could care less"). But, that's not going to settle it for everyone.

My hunch is that "in the hole" fell out of favor as time went on because it seemed to be a phrase that stated something that was clearly not true. Relatively few people had the background of service on an aircraft carrier that would help them understand the meaning of the phrase. Since the second person in line has no hole to stand in, why refer to a hole? It helps a little that "on hold" sounds a lot like "in the hole," so maybe you can get away with using it a time or two--which inevitably leads to more attempts--on the sly.

The trouble here, though, is that the second person up also has nobody or no thing exercising a hold (no half-Nelson, no Heimlich manuever, no... ) on his or her person, so why pretend that "on hold" is somehow more transparent than "in the hole"?

And, if you argue the "hold" is figurative (as in a plane in a holding pattern), then nothing about that "hold" differentiates the second-to-next competitor from any other competitor in the flight, except the one actually up at the moment. Presumably, we should only use words to describe people (with the exception of "special") when they actually help to differentiate the people so described from other people for whom they could be otherwise mistaken. Since the whole flight is "on hold," using that expression isn't very helpful.