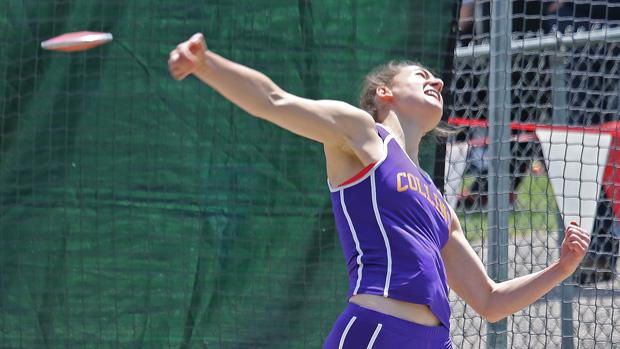 Josephine Natrasevschi is one of several Colorado high school throwers in the last 10 years who have made a significant mark on the national-level scene. Photo by Jeff McCoy.

So far, we've looked at XC/Distance trend lines and 400 meter trend lines. It's time to do a field event.

I'm starting with the discus, which could be a bit problematic. We all understand the discus is a little bit of a fickle event. Someone might throw 160 one week, then 135 the next. Great throws don't come together on a very consistent basis for most throwers. But, over the course of a season, one might reasonably expect that enough opportunities come together that most every thrower's top mark of the season is at least somewhat indicative of what he/she is capable of.

Once again, I'm looking at the number of athletes meeting an elite standard and the number meeting a high-end standard that many hard-working athletes can attain. I can 170 feet and 150 feet as those standards for boys. I also added a third standard for boys at 140 feet to see if there would be any additional information to be gleaned there. I picked 140 feet and 120 feet for girls, then added 110 feet as a third standard. We see fewer athletes meeting these standards for both boys and girls than we did with distance events and 400 meters, but it's also safe to say there are fewer athletes who attempt--and stay with--the discus than there are for XC/distance and 400 meters.

When we look at what I've called elite marks (170 for boys and 140 for girls), there is no abundantly clear trend to be observed. But, there's a suggestion, if we squint our eyes kind of hard at the data, that the count of boys reaching the "elite" mark is slowly declining, while the count of girls reaching it is slowly increasing after a big jump in 2011.

There is considerable saw-toothing of counts of athletes at 150 for boys and 120 for girls, but greater consistency (less saw-toothing) in recent years, hinting that we might be reaching a point of greater stability in the number of young men and women reaching those marks.

When we go to 140 and 110, we see a flattening of the boys data, after a possible jump from 2009 to 2010. There is a definite jump for the girls that appears to have taken place over a span of about three years from 2009 to 2012 and a very distinct flattening thereafter.

In short, we are not currently seeing any kind of surge in discus performances here in Colorado. And, this is despite the fact that the period which we've covered here includes all or part of the high school careers of several national-elite level athletes from here in Colorado. Think of Mason Finley, Adam Dawson, Valarie Allman, Kiah Hicks, Jospehine Natrasevschi, and Haley Showalter as a few examples. As fun as it's been to watch these athletes ply their trade, they do not appear to have exerted an overall lifting effect for the event as a whole.

Another question worth asking, though, takes us all the way back to 2009. 2008 was the first year that Colorado Track XC made meet results and rankings for Colorado high school performances generally available across the state. I don't know how you'd prove it, but you could make a strong case that that availability produced a short-term spike in performances. After the spike, however, things appear to have mostly stabilized at a new level.

And, where stability has not settled in, we are seeing--if anything--a slight decline in performances.

That is, at least, an interesting theory to ponder. Another interesting question would ask if we're seeing the same thing across the spectrum of events.