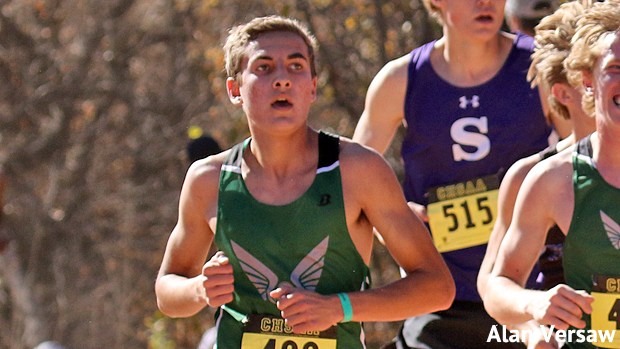 Grant Norman is part of a core of experience D'Evelyn will be relying on heavily this fall.

For a long time last year, D'Evelyn sat at or near the top of the 3A Boys virtual meet rankings. As it turned out, though, that position resulted--at least in part--from a course that ran very fast at their opening meet of the season, one the Jaguars hosted.

What it had to be, however, was a bit anticlimactic. Through the remainder of the season, D'Evelyn never again reached the heights attained at their opening meet. Perhaps they were close a time or two, but never quite there. It didn't help that one of their scoring runners from that meet opted for soccer over cross country not long after.

Yet, despite all of that, the makings of a very good team still wears D'Evelyn green. The Jaguars return no less than four sub-17 types from last season--Nate McDonald, Grant Norman, Lucas Jordan, and Connor Humiston. And, three of those four did run sub-17 somewhere else--at least once--after the season-opening D'Evelyn Dash.

Norman, Jordan, and Humiston ran sub-11 for 3200 meters in track. There were, however, only two sub-5s for 1600 meters among the four who broke 17 in cross country--and none from other members of the team.

So, there's a bit of a Jekyll-and-Hyde thing going on with D'Evelyn distance at the moment. This might easily become a team that challenges seriously for a 3A title. Or this team may end up looking a lot like last year's team that finished fourth, but simultaneously well out of contention for the team title, at last year's state meet.

The front four of Humiston, McDonald, Norman, and Jordan seems solidly in place. Adding a fifth at or near their level would be a serious game changer for the Jaguars. 3A used to be friendly territory for teams that didn't quite go five deep. That's changed considerably in the last couple of years.

Counting digging into the middle school roster from last fall, there are no strong possibilities for additional sub-17 types waiting in the wings. That person or persons must be found or developed.

Senior Hunter Byram and junior Caleb Feagans have both shown promise and appear, at least for the moment, as the strongest possibilities for filling that #5 slot.

Keep an eye on how this team develops through the month of September. We should know a whole lot more about the prospects for this team when the calendar turns to page to October.